Meet the Man Who Has Helped 2,100 Families (and Counting!) Afford Adoption: 'Every Child Deserves a Family'

"I saw a problem that needed to be solved," Hank Fortener tells PEOPLE

Hank Fortener still shudders when he remembers the day his 5-year-old foster brother, Hubby, was taken from his home 20 years ago.

“It felt like the most God awful thing that could have happened,” Fortener, 34, tells PEOPLE. “I can still hear him screaming my name as they walked him outside.”

Hubby had been part of Fortener’s Dayton, Ohio, family for two and a half years as a foster child, and Hank’s parents hoped to adopt him, but when an aunt was located in Detroit, Michigan, the state sent Hubby to live with her.

“For a short period of time, my parents would still go and visit him and they found him drinking out of the toilet because there was no water in the house,” Fortener says. “The last word that we got was that he was 12 and he had run away. He had just been pulled into this chaotic vortex.”

Even though he was just 14 years old when Hubby was taken, Fortener has carried the guilt of not being able to protect the young boy ever since.

“I felt like I was supposed to protect him and I couldn t and that marked me,” Fortener says. “It marked me in such a way that I could either carry that wound for the rest of my life or I could say I’m going to protect as many kids as I can because I couldn’t protect Hubby and I couldn t keep his future secure.”

To date, Fortener has helped some 2,100 couples, families and individuals open their homes to children in need through his website AdoptTogether.

Launched in 2012, AdoptTogether allows would-be adoptive parents to invite their friends, family and strangers alike to help them meet the costs of adopting (which can reach up to $40,000). In a little over four years, the site has helped to raise over $8.6 million to give thousands of children homes.

Fortener, who works as a pastor at Mosaic church in Hollywood, California, was inspired to start the site after countless people asked him how his parents – a stay-at-home mom and an IT director – managed to afford to adopt 8 children and foster 36 (in addition to raising Fortener and his two biological siblings).

“Of all the things we were, rich was never one of them,” Fortener says with a laugh. “We shopped at thrift stores for clothes and the only times we ever ate out were at Wendy’s – but my dad made sure we had enough money to take in kids who needed us.”

For years, Fortener heard stories from people who wanted to adopt, but couldn’t meet the up-front costs. So, in 2010, he started talking with his dad about building the framework that became AdoptTogether. After two years of hard work, the site went live.

“I was never a tech guy, but I saw a problem that needed to be solved,” Fortener says. “Every child deserves a family and financial barriers shouldn’t stop that.”

For adoptive parents Jessica and Dave Ludwig, finding AdoptTogether seemed “too good to be true.”

“It was amazing to have a place where we could invite our friends and family who wanted to support us,” Jessica, 36, tells PEOPLE.

Both ministers in Costa Mesa, California, and already parents to two biological children (Macy, 8, and Owen, 5) Jessica and Dave were eager to pursue an international adoption but unable to pull together the tens of thousands of dollars it would cost to bring a child home.

“We knew that in the long run we would have what we needed to support the kids and take care of them, but we didn’t have $50,000 just sitting around to get things started,” Jessica says.

So, the Ludwigs created a profile on AdoptTogether. In just over a year, they raised nearly $55,000 – enough to bring twins Cora and Elias, who had been living in an Ugandan orphanage since their mother died in a fire, home in September 2014.

Now 3, Cora and Elias are excelling at preschool in California and the Ludwigs are paying the generosity they received forward by sending money back to the twins’ four siblings in Uganda to pay for their education.

“We hope to go back to Uganda soon and to make that a regular thing,” says Jessica. “We knew when we signed up for an international adoption that we weren t just going to take the kids out of their country and their culture – we’re working to develop roots over there, too.”

Like the Ludwigs, Mimi and Daniel Chang say they worried about how to meet the costs of their adoption – so much so that the questioned whether or not expanding their family would be possible. After creating a profile on AdoptTogether, the Changs raised more than $10,000 and were able to bring their now 2-year-old son Ethan home.

“It was a great way to share our story and invite friends and family to help out,” Daniel, 31, says.

It’s the power of each AdoptTogether family’s story that Fortener says will turn his website’s concept into a movement. In 2014, he launched World Adoption Day to raise awareness of and support all members of the adoption community.

“Every other person has a connection to adoption,” he says. “The adoption community is not just some small group of people who traveled across the sea to adopt a child, it’s all of us.”

In the coming years, Fortener hopes to extend the services offered by AdoptTogether to include post-adoption support and dollar matching from corporations. He also hopes to expand AdoptTogether’s reach into his own life by using the platform to expand his own family with wife Sueann, 40, and biological daughters Cora, 4, and Charlotte, 1.

“The day our profile goes live, I will be so honored and excited to join the thousands of AdoptTogether families who have grown their family through adoption,” he says. ” With the click of a profile, a crowd becomes a community and a child has a forever home.” 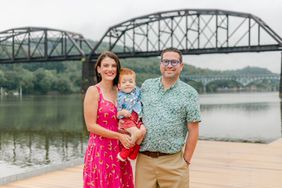