Louise Brown, the world's first IVF baby, reflects on her historic birth in a new interview with TIME

Exactly 40 years ago on Wednesday, around the time when a 100-page issue of PEOPLE magazine featured an ad for “enriched flavor” cigarettes and a cover story on the return of Star Wars, Louise Brown was born.

Brown is the world’s first baby born by uniting egg and sperm in a petri dish (rather than a test tube as is commonly thought). Her revolutionary birth by in vitro fertilization (IVF) marked the beginning of a new era in reproductive technology; since then, 8 million babies have been born worldwide as a result of IVF.

For her 40th birthday on Wednesday, Brown sat down with TIME and reflected on the media circus surrounding her historic arrival, and the public criticism at the time of her parents, Lesley and John, for allowing doctors to film the caesarean section birth.

Brown tells TIME that the birth needed to be public, to prove that the masterminds behind IVF, British scientist Robert Edwards and his gynecologist colleague Patrick Steptoe, had in fact found a way to conceive life outside of the human body.

“My parents didn’t have a choice about making it public,” Brown says. “If they didn’t, they would have had people asking ‘Why can’t we see her? What’s wrong with her?’

“Had there been anything at all wrong with me, it would have been the end of IVF,” she adds.

Brown says that, though her late mother was a private person, Lesley ultimately had no regrets about the experience. “She would have done anything” for Steptoe and Edwards, Brown explains, because she was so grateful.

“Not long before mum passed away, she said that without IVF she wouldn’t have anybody left in the world,” Brown continues. “Even up to her last days she was proud of who she was and what she did.”

Today, Brown lives a “very normal life” in southwestern England, where she works for a freight company and lives with her husband and two sons, who were naturally conceived.

Brown also marked her 40th birthday by revealing a family archive containing letters, gifts, photos and newspaper clippings detailing her historic conception. The mementos, now displayed in Bristol Archives, were found in a wardrobe after her mother’s death in 2012.

“Dear Mrs. Brown, Just a short note to let you know that the early results on your blood and urine samples are very encouraging, and indicate that you might be in early pregnancy. So please take things quietly — no skiing, climbing or anything too strenuous including Xmas shopping!,” a letter from Dr. Edwards reads.

While IVF births are becoming increasingly popular — in an “IVF Baby Boom,” as dubbed by NPR — the procedure was groundbreaking four decades ago.

Steve Van Wie, a 32-year-old Navy pilot, and his wife Alyce, 30, spoke to PEOPLE magazine in 1978 about the sense of hopelessness they felt before Brown’s IVF birth, as they struggled to conceive.

“I feel like I let Steve down. Every month I feel like I’ve let the doctors down. I’ve let Steve’s father down — he wants a grandson to carry on the Van Wile name. You buy the perfect house, you have the perfect marriage, you try every month. But no baby,” Alyce told PEOPLE at the time.

The procedure was also controversial at the time — subject to debates about the ethics of “human-life experimentation.”

“Although some 150,000 U.S. women are unable to bear children because of blocked fallopian tubes (and possibly could benefit from out-of-body fertilization), American research came to a virtual halt four years ago. Troubled by the ethics of such human-life experimentation, HEW stopped funding Soupart’s work, pending review by a national ethics advisory board,” the PEOPLE story read, referring to fertilization researcher Pierre Soupart’s work.

Brown’s birth changed the trajectory of fertility treatment in the United States and beyond.

“Now I tell a woman not to let anyone talk her into a hysterectomy because her tubes are diseased,” Soupart’s partner, Nashville gynecologist James Daniell, told PEOPLE in 1978. “I say, ‘Hang on — there’s some research going on right now which could solve your problem.’ ”

With the success in Britain, hopeful parents began fighting stereotypes attached to IVF. A couple interviewed for the magazine story avoided the term “test-tube baby” in an attempt to normalize the procedure.

“That’s 1984, George Orwell. We feel this is no more foreign than walking around with a stainless steel hip joint or a Dacron heart valve,” Dennis Grills, a chemical engineer at the time, told PEOPLE.

“A few months ago I was in the supermarket with my husband and sons and I heard footsteps running up behind me,” she says. “It was a woman and she had a 4 year-old — the same age as my son — and a tiny baby in a pram. She said that she’d always wanted to thank my mum and me because without us she’d never have had those two. It makes you tear up.” 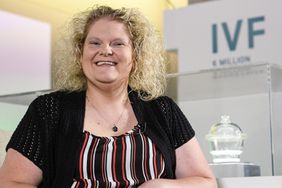 It's International IVF Day and The World's First IVF Baby Is About to Turn 41! 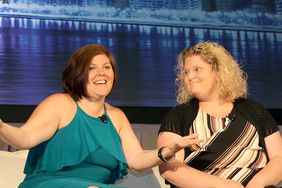 World's First 'Test-Tube' Baby and America's First IVF Baby Meet for the First Time: 'We Have a Common Bond'

First Test Tube Baby Has Baby of Her Own