Even during a difficult time, Jim Adams and Audrey Coutts found a reason to smile.

According to Oprah Daily, the two lovebirds matched on the dating site Silver Singles in late 2020, months after the COVID-19 pandemic began.

"I came across Audrey on my first go-through on the site," Adams, 78, told the outlet. "It only took a day to find her. After that, I didn't need it anymore. I said, 'Well, I have to meet this person who's as crazy as I am.' "

The dating site calculates how good of a fit a couple may be based on their interests, and Adams and Coutts scored a whopping 94 percent on the compatibility meter.

Coutts, who divorced 33 years ago, told Oprah Daily that she had been a member on the site for years but never found anyone she wanted to have a relationship with — that is, until she matched with Adams. 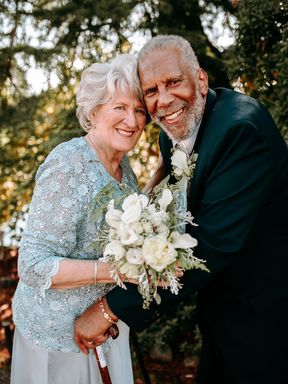 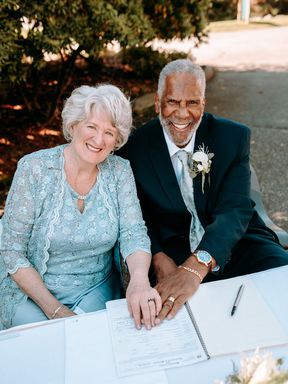 Just three months after their first date, Adams — whose wife died in 2017 — invited Coutts to move in with him. He then proposed to her in May of this year.

"It seemed like I'd been living with her for years," Adams told the website. "I'd be sitting here thinking about something, then she would say it. I would start to say something, and she'd say the same thing almost at the same time."

Iowa Couple Recreates Wedding Photos to Celebrate 50th Anniversary: 'Something to Aspire to'

"We were connected," he added. "So what were we waiting for? The only reason it took me so long to propose was I had to find the ring, and that took two months."

The two live in Canada and were married on Sept. 25. Photographer Julie Rand (website here) was on hand to snap pictures of the special occasion.

Now the two are looking forward to spending the rest of their lives together.

"We live on a quiet street, and we have a quiet life," Adams said. "We can spend days on end doing very little and when it's raining, we don't even need to go out. I paint, I'll rub Audrey's feet, and go back and paint some more."