"When a 2 year old comes to brunch you perform baby shark for them!!!!" Marti Gould Cummings wrote on Twitter

A New York drag queen has gone viral after a toddler made a very special request at a recent brunch show: the infectious kids’ tune “Baby Shark.”

Marti Gould Cummings shared video of the adorable moment on social media, showing the 2-year-old clapping along and smiling as Cummings performed the popular song.

“When a 2 year old comes to brunch you perform baby shark for them!!!!” Cummings wrote.

The clip soon went viral, racking up more than 500,000 views and love from stars like Audra McDonald, who retweeted the sweet video, and Gus Kenworthy, who liked it on Twitter.

“Hiring you to come sing it to Sally👏🏾👏🏾👏🏾👏🏾,” McDonald wrote, referring to her 2-year-old daughter with husband Will Swenson.

The heartwarming moment happened at Talde in Jersey City, New Jersey, during a Drag Queen Brunch, Cummings — who prefers the pronoun they/them — said on Twitter.

They told the New York Daily News the request came as part of a “Drag Roulette” portion of the brunch in which attendees could request songs.

“Between Lady Gaga and Beyoncé, we did ‘Baby Shark,’ ” Cummings told the Daily News. “The world is so scary and to have a little moment of joy and people excited to see that, that’s why we do drag … We want to give people a moment of escape.”

Cummings later joked on Twitter that the biggest criticism they’d received regarding the video was their dance moves.

“The biggest internet ‘Hate’ is that I didn’t do the choreography to baby shark …. guess I better learn it!” they wrote.

While much of the reaction was positive — “This just flooded me with joy,” actress Julia Murney wrote on Twitter — Cummings remained calm after a user questioned what type of restaurant would allow a child at a drag show.

RELATED VIDEO: ‘RuPaul’s Drag Race’ Stars Shuga Cain and Honey Davenport Reveal Who They Would Love to Dress in Drag

“A place that is welcoming to everyone,” Cummings responded. “Where joy is spread and hate isn’t aloud [sic] through the doors.”

Cummings explained to NBC News that they were thrilled that the special moment was spreading such joy on the internet, where negativity is the norm.

“The internet can be such a toilet for negative, toxic behavior and misinformation, so it feels incredible to be part of this one moment that is using the internet to spread so much love and joy,” they said. 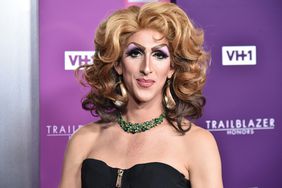 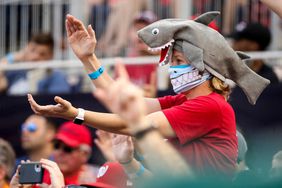