Divorced Parents Reunite Each Year for Family Photo: 'You Are Not Divorcing the Child'

"Bruce didn't ask for the divorce, we did. So we need to sacrifice to make sure he doesn't have to," Victoria Baldwin tells PEOPLE

Parents Victoria Baldwin and Adam Dyson may no longer be together, but one tradition remains: their annual family photo shoot.

The former couple, who were married for three years before divorcing in 2015, are parents to 4-year-old Bruce. Baldwin, a professional photographer who is also in the military, now lives in Alaska, while Dyson lives in South Carolina, but the exes reunite each year for a touching photo.

Baldwin says she was inspired to continue their annual family photo shoot after realizing that she doesn’t have any pictures from her own childhood that include both of her parents, who were also divorced.

“I have always valued photos because I never had more than two or three of myself as a kid,” the 28-year-old mom tells PEOPLE.

“I thought it was important for Bruce to see the photos of him with both of his parents, and I certainly didn’t want to throw the [previous] photos away after divorce — that just seemed silly!” she says.

Bruce now has all four family photos displayed proudly in his room.

“Bruce is so much happier now that Adam and I get along better than we did when we first separated. It has been nearly three years, so we have practiced a lot!” Baldwin shares.

“Bruce loves when mom and dad are together, because he gets to talk to both of us at the same time and tell us about his day and show us the new things he can do,” she continues. “His favorite is having two people to make him ‘fly’ by swinging him in the air!”

As for advice she would give other couples going through a divorce, she says: “The divorce is about you and your spouse — you two are the ones making the decision to separate, and that’s okay — sometimes it doesn’t work out.

“But while you are divorcing the parent, you are not divorcing the child. Make an effort to include [your ex] — it may sting you, it may make you cringe because you have hurt feelings or anger or sadness — but your child will thrive because of it.

“Bruce didn’t ask for the divorce, we did. So we need to sacrifice to make sure he doesn’t have to.” 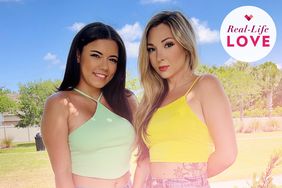