Jeffrey and Lorrie Agan first fell in love more than two decades ago, and after divorcing in 2014, they did it again

Wedding bells will be ringing again for a couple who divorced after being married for two decades.

Jeffrey and Lorrie Agan of Bowling Green, Ohio, got married back in 1989 in a local electronics store when they couldn’t afford a traditional wedding. While their union saw the birth of eight children, it was also plagued by intense fighting, Jeffrey and Lorrie divorced in 2014. The split was difficult for the family, the couple’s 21-year-old son, Jeffrey Agan Jr., told BuzzFeed.

“They fought, separated, divorced, and it tore the family apart,” Jeffrey Jr told Buzzfeed. “Each of us felt like we had to cope with the destruction in different ways, and on our own.”

But something positive came from their separation: it gave Jeffrey and Lorrie ample time to reflect and find self-renewal on their own. Jeffrey started working out and writing poetry, and returned to nursing school after a long career in truck driving, while Lorrie found peace in meditation and nature. Soon, this gave the two former lovebirds confidence to rekindle their relationship.

So, with things looking up, Jeffrey surprised his sweetheart on Dec. 22 with a personalized gift: a poem he wrote and had framed. In a video posted on Twitter by Jeffrey Jr., Lorrie is seen slowly unwrapping the gift while surrounded by family, hilariously asking “Is it pizza?” as she examines the box.

Once it’s opened, Lorrie starts to read the poem aloud as Jeffrey kneels in front of her—and though the family was not given a heads up as to what their father had planned, they quickly put things together.

“No one knew Dad had planned the proposal, and the detail and love he put into it,” Jeffrey Jr. said. “But I read the situation quickly as it was happening, and I pulled out my phone and caught a great recording!”

When Lorrie gets to the end of the poem, she looks up to see Jeffrey holding a ring, and she shouts “yes!” as she rushes to embrace him. The video of the poetic proposal, which was posted on Dec. 23, has since received more than 9 million views and hundreds of thousands of favorites and retweets on Twitter, and has pulled on the heartstrings of many on social media.

After the video went viral, Jeffrey Jr. started a GoFundMe page to raise $2,000 to help give his parents a proper wedding (one not in an electronics store), and it met its goal within a day.

“I still legit cry every time I watch this video,” Jeffrey Jr. wrote on Twitter. “This is such a blessing to my family, who have suffered years of division. One family, whole again, I couldn’t wish for anything better for Christmas!” 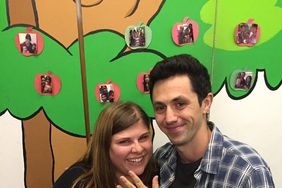