A Brazilian gang leader was caught impersonating his teenage daughter in an attempt to break out of a Rio de Janeiro prison on Saturday — marking his second try at escaping.

Clauvino da Silva, also known as “Shorty,” may have gotten away with it — if he hadn’t appeared nervous in front of the guards at the Bangu prison complex, according to the Associated Press. Da Silva, 42, wore a mask, a long, dark-haired wig, jeans and a pink shirt to look like his 19-year-old daughter as he attempted to walk out the front door of the facility.

Apparently his plan was to switch places with his daughter, who was at the prison for visitor’s day. Da Silva might have intended to leave her in his place — authorities are looking into whether she was in on the plan, the AP reported.

“When he started talking, and pretending to speak like a woman, the guard realized that it was an attempted jailbreak, and identified him,” said deputy head of prison operations Moyses Henriques, according to Reuters.

He added: “Really, this was an act of despair, as [Silva] is facing a sentence of 73 years, and he recently got another 25 years more.”

Authorities said da Silva’s daughter and seven other visitors were arrested on suspicion of helping him to escape, Reuters reported.

Footage shared by the O Dia newspaper showed da Silva taking off the clothes and peeling off the mask before stating his name.

Authorities said da Silva was part of the Red Command, a powerful arms and drug trafficking criminal organization in Brazil, according to the AP.

Saturday’s stunt marked da Silva’s second known escape attempt. In 2013, he was among 31 prisoners who escaped the Vicente Piragibe Penal Institute through its sewer system, according to the New York Times. He was eventually caught. 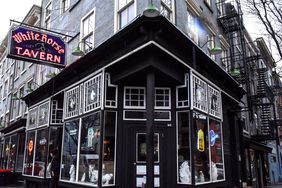