• Kate Bosworth, mixing with a star-studded crowd (including Mary-Kate Olsen and Clive Owen) during a Calvin Klein sponsored bash at New York’s Mercer Kitchen following a screening of her movie, 21. The actress was happy to hang out with Helena Christensen as revelers feasted on salmon, French fries and lots of cookies and pastries in the underground restaurant. Meanwhile, Olsen stayed deep in conversation with friend Derek Blasberg – tucked away in the back – and 21 star Jim Sturgess stuck close with his girlfriend, Mickey O’Brien. Later, the crowd moved to Submercer, a tiny subterranean bar that guests could enter from inside the restaurant – continuing the celebrations late into the night.

• Adrien Brody, casually checking out art with a male friend at the Armory Show preview party in New York. Also there (separately): Matt Dillon, discussing specific pieces with dealers and looking very intense as he checked out the art.

• Jennifer Aniston, Courteney Cox Arquette, Eva Longoria Parker and Orlando Bloom, chatting over chips and guacamole in an upstairs VIP booth at a party in Hollywood to raise awareness for the Epidermolysis Bullosa Medical Research Foundation.Meanwhile, downstairs at Longoria Parker’s new restaurant Beso: Host Ken Paves caught up with clients Jessica and Ashlee Simpson over pizza in the booth they shared with pals CaCee Cobb and boyfriend Donald Faison. And nearby, Kate Beckinsale and director husband Len Wiseman shared their booth with Rose McGowan and her director fiancé Robert Rodriguez.

Want to see where the celebrity action goes down? Tour all of the Celebrity Hot Spots. 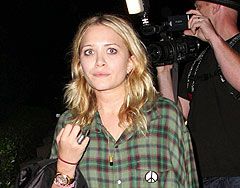