It was a historic day at a California hospital when four sets of twins made their grand entrance into the world within a 32-hour span — a one-in-a-million chance that some of the parents and staff say was only fitting for births during a pandemic.

The multiple twin marathon at Lucile Packard Children's Hospital Stanford in Palo Alto began at 8:15 a.m. on June 29, when Jisil Lee and Dohyup Kim welcomed their son Ethan and daughter Yisol into the world.

After a few hours, two more sets of twins made their entrance, including Kelli and Zachary Smith's twin boys Henry and Logan, at 3:03 p.m. and 3:05 p.m.

Finally, on the following day at 4:07 p.m. and 4:08 p.m., Rob Sacher and Emma Anderson welcomed their bundles of joy: baby girls named Hadley and Olivia.

"It is a 'miracle' amid such trying times. Seeing such joy and happiness that came into these families' lives brought peace and comfort to the entire unit," Mary Jane Brinkerhoff, a patient care manager in the hospital's Labor and Delivery Unit tells PEOPLE.

Though welcoming a child — much less two babies — during a pandemic undoubtedly brought its own set of challenges, the parents admitted that they always sensed their little ones' birth would be special in some way.

"I knew these girls were going to come into this world with a bang," Anderson says, noting that Hadley and Olivia arrived two days early at 35 weeks and three days due to sudden health complications. "With coming two days early, they made themselves a part of this amazing twin phenomenon. They were determined to make themselves known."

"I come from a long line of twins in my family, so I always knew twins were a possibility for me," she adds. "Having twin girls is special to me because we are keeping the family tradition going."

Kim echoed her sentiments, noting, "We were going to have only one pregnancy in our time, but my wife [Jisil] wanted to have a girl, while I wanted to have a boy. We ended up with both, which was very, very special for us."

For Smith, the pandemic wasn't the only thing that caused concern during her pregnancy.

"When I was diagnosed with cancer seven years ago, I was concerned about challenges in conception. After beating cancer, I was left with several medical conditions that made pregnancy high-risk and when we learned we were having twins, it was all the more risky and doctors warned that carrying two babies could jeopardize my own health," she explains.

Still, she says, "My husband and I decided the risk was worth taking for the possibility of having the two little miracles we had prayed for. Each milestone of the pregnancy felt like a cause for celebration. Their births were the greatest moment of our lives."

"We always knew this pregnancy was something special," adds Smith. "These boys felt like our own 'one-in-a-million chance,' so it only made sense that the conditions of their delivery would be equally special."

Lee, the first mother to give birth, had to undergo an emergency C-section as her babies were large — a combined 14.5 lbs. — and very stressed inside the womb, according to the hospital. Doctors told her that Ethan had the umbilical cord wrapped around his neck three times, while Yisol's placenta was almost separated, which required immediate action.

Despite the high-risk delivery, Kim says having their babies included in the rare twin marathon made them feel like "we were not alone in these hard times."

The parents have since taken their little ones home, where Kim notes they are "doing very well."

"Both my wife and I just want our daughter and son to be healthy and happy. I cannot wait until they grow up and we tell them this dramatic twins story in times of COVID-19," he shares. "They wouldn't believe the miracles that happened from their births."

Smith also had to undergo a C-section due to her high-risk pregnancy but made it through the delivery safely — something she says was "an incredible relief." After five days, she and her husband brought their sons home, and Smith says "their doctor is very happy with how they are growing."

RELATED VIDEO: Identical Twins Give Birth at the Same Time on the Same Day: 'We Can't Wait for Them to Grow Up Together"

Anderson's little girls had to stay in the hospital's Intermediate Care Unit after she welcomed them via C-section because they were underweight, but she says Hadley has since gone home, where she is "gaining weight and feeding like a champ."

As for Olivia, who is slightly smaller than Hadley, Anderson notes "she has a little more time in the Intermediate Care Unit but doing well," and adds that her little girl is "small but mighty."

With the successful delivery of twins four times over, Brinkerhoff believes the hospital's staff is leaning into these miracles to carry on amid tough times.

"This experience helped me to see that joy and happiness can come when one least expects it, and in sets of four," she says. "I am grateful that I could be part of such a great team and see these miracles every day. Seeing these babies born not only has lifted our spirits, but it has also helped us know that we are going to be okay." 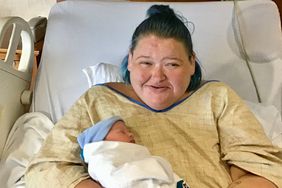 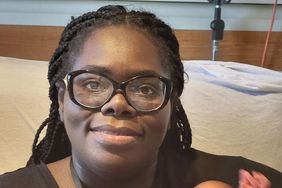 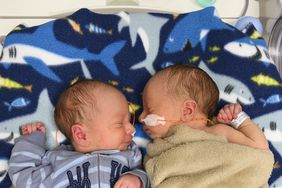 Seeing Double! 12 Sets of Twins Were Born in a Missouri Hospital in Just 1 Week 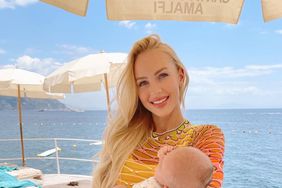