Backstreet's back – with a new album and a new maturity

In July, the Backstreet Boys – the quintessential ’90s boy band – kicks off a world tour in support of Never Gone, their first studio album since 2000’s Black and Blue. Nick Carter, Brian Littrell, Kevin Richardson, A.J. McLean and Howie Dorough talked with PEOPLE about what they’ve learned over the past years and what they’re up to these days.

The past year has been tumultuous for Carter, 25: In 2004 he dated, and very publicly split with, Paris Hilton, and in March he was arrested on charges of drunken driving in Huntington Beach, Calif. “I’ve had a lot of stuff that I’ve learned from,” he says. “And I’ve been able to input that into the music.” Besides the new BSB album, he’s writing songs for his second solo release, the follow-up to 2002’s Now or Never. “I like The Killers a lot. Bob Dylan, Roy Orbison – I want to be able to put those types of influences into the music.”

Carter has also been working to help his troubled family (parents Robert and Jane split in 2003, and the next year, brother Aaron, 17, accused his mom of stealing millions from him). Carter is close with Aaron and sister Bobbi, 23, who lives with him in L.A. “I’m basically assuming a father role,” he says. As for his love life, he says, “I learned about what I want next time around and what I don’t.”

As the oldest Backstreet Boy, Richardson, 33, has always been somewhat of a patriarch for the group. “He keeps everyone together,” says his wife of five years, actress Kristin Richardson. But he’d like to be a real dad soon: “Me and my wife have always wanted to have a family,” he says. “Depending on her schedule and if things go well with the record and we tour all year, sometime after the tour we plan on starting a family.”

Brevard County, Fla.-based Dorough, 31, is the group’s multitasker: Besides running his own company, Howie Dorough Productions, he’s been investing in real estate (“I’m doing condos and a hotel,” he says) and trying his hand at acting (he has a small role in the upcoming drama Constellation, starring Gabrielle Union).

He’s also still involved with the Caroline Dorough-Cochran Lupus Memorial Foundation, established after his older sister died in 1998 of complications from the disease. “You don’t realize how good you have it until you lose someone close to you,” the singer says.

Clean and sober since 2002, McLean, 27, is enjoying life without alcohol. “I have no desire to drink ever again,” says McLean. These days, he gets his buzz from the audience at BSB concerts. “The crowd is so hyped,” he says. “You feed off of that. It’s like a drug that won’t kill you. It’s a good drug.”

The L.A.-based singer, who shares his home with his Bernese mountain dog, Bernie Mac, is also happily single: He and his former fiancée, singer Sarah Martin, split a couple of years ago.

“Being a father has made me very selfless,” says Brian Littrell, the only BSB member who’s also a dad. The 30-year-old has a son, Baylee, 2-1/2, with his wife of four years, actress Leighanne Littrell. “I think it changes things for the better because the other members (of the group) understand me a little more.”

Littrell, who underwent surgery in 1998 to repair a congenital heart defect, now has a clean bill of health and is pursuing a career as a solo artist. He’ll release his Christian-music CD in November. “There’s a song on my record called ‘My Answer Is You’ that talks about how my life is different because faith is in my heart.”

The Boys Are Back! 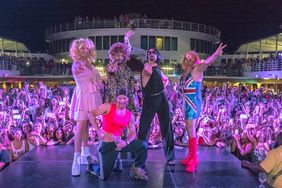