1. Ray Charles gave him his blessing
Before Jamie Foxx, 36, was cast as the lead in the soul legend’s biopic, he had to pass a tough test: play with Ray. The 73-year-old R&B pianist – who died in June – and the actor-comedian traded riffs for about two hours, then “Ray jumped up, hugged himself – when Ray got excited he’d hug himself – and said, ‘This is the guy,’ ” director Taylor Hackford told PEOPLE. Now Foxx, who took piano lessons from age 5 and studied classical music at U.S. International University in San Diego, is hearing awards buzz for Ray, due this fall. “A lot of people say, ‘Don’t jinx it,’ ” Foxx says. ” ‘Don’t say Oscar.’ I say, ‘Hey, say it.’ ”

2. He drives ’em crazy
Foxx nailed his cabbie role in the thriller Collateral – even down to the white-knuckle driving. After telling his costar and passenger Tom Cruise “I got this,” Foxx “went headfirst into this Mercedes. He’s in the backseat, about a billion dollars of a man going up … (The crew was) very serious when I got back.” So much for his character Max’s 12 years of experience behind the wheel.

3. He’s the host with the most
“I don’t bomb,” Foxx promised before tamely hosting the MTV Video Music Awards in 2001. While he left insults outside for that one (“Jay Leno and David Letterman hit [celebrities] every night”), he was no-holds-barred for ESPY Awards duty in 2003 and 2004. Foxx, who’s dad to Corinne, 9, and boyfriend to actress Leila Arcieri, climbed atop tennis champ Serena Williams during the July ceremony and serenaded her – for the second straight year – with “Can I Be Your Tennis Ball?”

4. He’s got game
Not only did Foxx play quarterback in high school for the Terrell, Texas, Tigers, but he also led the game in Hollywood. As football star Willie Beamen in the 1999 gridiron drama Any Given Sunday, Foxx – who also had WB sitcom The Jamie Foxx Show at the time – was in the big leagues, playing onscreen with Al Pacino, Dennis Quaid and Cameron Diaz. Two years later he was tapped to be Will Smith’s right-hand man in Ali, as Drew “Bundini” Brown.

“At the end of day,” Foxx says, “it’s not about how much money or how many awards or whatever, it’s the moments and the marks that you leave – and that admiration from people that you’ve been looking at for however many years when you’re coming up in your career.”

5. He’s got a sly name
If “Jamie” sounds a little bit feminine, that means his plan is working. When the comedian was trying to break into the L.A. club scene’s amateur nights, his birth name, Eric Bishop, wasn’t making the cut. “I noticed they always picked girls. So I started handing in unisex names – like Stacey, Tracey and Jamie,” he told PEOPLE. “I loved my old name. But Eric Bishop was Clark Kent. And Jamie Foxx is Superman.”

Jamie Foxx: Inside His Life

Jamie Foxx: What You Need to Know 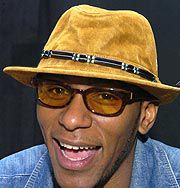