The life of a 4-year-old boy has forever been changed after his parents and two siblings were tragically killed in a car crash on their Thanksgiving vacation.

Julian Montano was identified as the sole survivor in Saturday morning's fatal crash, according to a GoFundMe page set up by his uncle, Anthony Gonzalez.

Sadly, Julian's parents — Brittney and Antonio Montano, both 29 — as well as his 9-year-old sister and 5-year-old brother all died in the head-on collision, the GoFundMe stated.

Their identities were later confirmed by the Nevada County Sheriff's Office in a press release obtained by PEOPLE on Wednesday.

"Everybody's suffering from this," Anthony, who is Brittney's brother, told NBC affiliate KCRA. "This is a giant loss. Four family members at once is too much."

The incident began to unfold at 4:43 a.m. after a witness called 911 to report a wrong-way driver on Interstate 80 near Eagle Lakes Road in Nevada County, KCRA and KTLA reported, citing the California Highway Patrol.

At the time, the Montano family was on their way to the Grand Canyon, where they planned to enjoy a family vacation and celebrate Thanksgiving, the GoFundMe stated.

"They were going to be gone for Thanksgiving," Gonzalez told Fox affiliate KTXL. "[Brittney] took it upon herself to have Thanksgiving at her house last week, on Sunday."

Minutes after the 911 call, a driver going the wrong way slammed head-on into their vehicle, according to a collision report from California Highway Patrol. A third vehicle then collided with the two other cars.

According to the report, alcohol is a suspected factor in the crash.

"Alcohol may have been a factor in the wrong-way driver. It's a little too early to tell but that's the assumption," Sgt. Steve Casetta with CHP's Gold Run office said after the crash, per KCRA.

Following the incident, Julian was airlifted to a hospital in Reno, where he was met by Anthony and his wife Michelle, KCRA reported.

Michelle told KTLA that the boy underwent surgery for a broken leg and sustained fractures in his foot and ribs. Despite his "extensive injuries," Julian is "expected to make a full recovery," according to the GoFundMe.

While CHP has not yet charged the driver, they plan on doing so in the future, police confirm.

In the wake of the crash, loved ones have been struggling to wrap their heads around the tragedy.

"I always looked up to my little sister... everything she did was the right thing," Anthony told KTXL. "All at once, I lost my sister, my brother-in-law, my niece, my nephew at the same time. It was the worst day of my life."

The Gonzalezes also spoke highly of Brittney and Antonio, who had been married for 9 years.

"Tony would always be at our house, every single day, playing video games with my brother," Anthony recalled to KCRA of Antonio, a childhood friend.

"His sister was a really great person," Michelle noted of Brittney, who worked as a medical assistant at Sutter Medical Center and hoped to become a registered nurse. "She loved her brothers and really tried to look out for her brothers when they weren't doing so well."

7 Members of the Same Family Killed in Horrific Crash: 'My Heart Hurts Like It Never Hurt Before'

As Julian continues to recover from his injuries, Anthony said he plans to remain by his nephew's side and later adopt him when the time comes.

"We want to have all four of them buried so Julian can go visit his family when he wants, any time he wants," he continued. "I'll go take him because they were taken away too soon."

"We're going to take care of Julian the best that we can," Michelle added to KTXL.

Anthony said he set up the GoFundMe page to assist with funeral and burial expenses for his four family members. Additional funds will go towards supporting Julian. So far, the page has raised over $60,000.

Those interested in donating to the fundraiser can do so here. 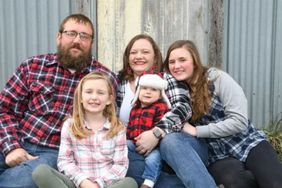