Christina Haack has no problem poking fun at her ex-husband, Tarek El Moussa.

In an exclusive clip of Thursday's new episode of Flip or Flop, above, Haack, 37, is seen trying to open a folding table, but struggles to get it to do so on her own.

Taking the table from her, El Moussa then opens it within a second of getting it in his grasp, as he playfully looks to his ex-wife to show her how easy the feat was.

But, fortune isn't fully in El Moussa's favor, as he struggles to get the legs of the table to stand on their own.

"Uh, our cameraman had to do it for you," Haack quips as viewers see a crew member giving his camera to Haack to hold while he finishes setting up the table for the show's stars.

"It took him one second," Haack tells El Moussa with a laugh, before the father of two jokes, "I was just testing you to see if you could do something."

After the table debacle is solved, Haack and El Moussa get down to business, planning how to reconstruct the kitchen of them they're flipping.

El Moussa is currently engaged to Selling Sunset star Heather Rae Young. He popped the question on Catalina Island in California while the couple celebrated their one-year anniversary with a boat trip. While they haven't shared too many details about their upcoming nuptials, they have revealed they'll say "I do" in 2021. 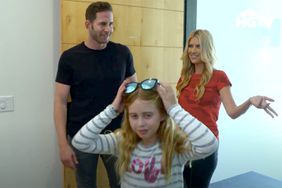