When he trades the newsroom for his sprawling suburban home, Melvin's focus is on family time

Craig Melvin spends his weekdays chasing breaking stories in his new role as a Today show news anchor alongside Hoda Kotb and Savannah Guthrie. But when he trades the newsroom for his sprawling suburban home in Connecticut, his focus is on family.

“This is where we have all of our laughs, all of our meals, all the mayhem, all the madness,” Melvin, 39, says of the five-bedroom, six-bath house he shares with his wife, Lindsay Czarniak, 40 — who’s currently anchoring CNN’s Bleacher Report and launching a podcast, Players, this fall — and their two children, Delano (Del), 4, and Sybil (Sibby), almost 2.

While the house was “practically brand-new” when they moved in three years ago, Melvin says, the couple enlisted designer Michelle Hogue to make it fit their needs.

They turned the office into a nursery and changed a third-floor guest bedroom into a shared workspace. The nursery is now Sibby’s domain, complete with a mural of a cherry-blossom tree (a nod to Washington, D.C., where the couple met) and bird-motif wallpaper on the ceiling.

A patterned wall covering also makes a big statement under the peaked roof line of the couple’s top-floor office, which Lindsay calls “the perfect mix of creativity and calm.”

“Michelle had to talk us into that idea,” says Melvin. “I said, ‘Where I’m from you put wallpaper on the walls.’ Then she did it, and we were like, ‘Wow, okay.’” “It was amazing,” adds Czarniak.

Czarniak took the lead in choosing a style for the main living spaces. “Everything above ground feels like her: bright, beachy, colorful,” Melvin says, looking to his wife and grinning before adding, “smart, attractive.”

The basement, which includes a wine cellar, home gym and media area, is his domain. It also features a unique living wall made of moss, different flora and driftwood. It was inspired by one in a hotel Melvin fell in love with while on the road covering a story. A designer from Terrain helped recreate the focal point.

The basement also features a full bar for the grown-ups and a cozy seating area for watching movies. Melvin admits the rustic-style space is his favorite room in the house.

“These days,” he jokes, “it’s the only place in the house where you can occasionally find 45 seconds of almost quiet.” 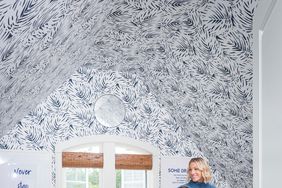 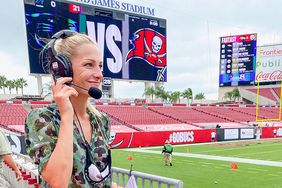 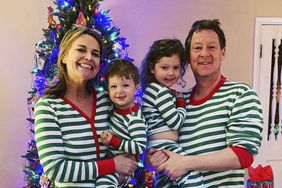