Judge told PEOPLE exclusively, she sold her newly renovated former home because "We had a neighbor that wasn't very nice."

Tamra Judge told her Instagram followers on Friday she's ready for some "new beginnings," and it looks like she's found just the property in which to start!

The Real Housewives of Orange County star, 50, and her husband Eddie Judge have purchased a pristine new property in the heart of California's Coto De Caza community, with help from realtor Shelley Black of Veranda Realty and listing agent Jackie Guthrie.

PEOPLE's got a sneak peek inside the 6-bedroom, 4.5-bathroom home, which sits on a 9,989-square-foot private lot, nestled amid oak trees and with plenty of privacy.

Like Tamra's former Southern California home, which she sold right after finishing a major renovation, her new property has recently been completely redone, with every detail exquisitely style by Done Decor and designed Maison Rose.

From the formal entryway by the two-story staircase, the Judges can access a formal dining room and living room — the latter contains a fireplace and plenty of room for a piano.

Nearby are a walk-in food pantry and butler's pantry with wine refrigerator as well as an office and an updated open kitchen with Carrara marble countertops, stainless-steel appliances and a large island.

The kitchen spills over to an eat-in nook and family room with access to the lush backyard. The space has plenty of room for wrap around couches, a large-screen television and a fireplace.

Upstairs, among several smaller bedrooms and bathrooms is the master suite, which Tamra and Eddie will enter into through double french doors. The en suite bathroom contains a free-standing tub, walk-in glass shower for two, and huge closet built to hold any Real Housewives' wardrobe.

There is plenty of storage throughout, with customized closets and built- ins, garage storage and racks, and even a custom bench in the eat-in kitchen area.

Outside, the Judges will have access to a large grassy area, a patio with a BBQ, and a pool and spa area to cool down from the California sun.

Earlier this month, Tamra opened up about the real reason for selling her former home — a 4,000-square-foot Ladera Ranch property that she bought for nearly $1.6 million and listed for $1.8 million.

After briefly claiming "It just wasn't a good fit for us," — and disproving another theory ("It's not haunted") — she told PEOPLE exclusively, "We had a neighbor that wasn't very nice."

Tamra added, "She didn't want us to film there. She was causing problems with HOA [home owners association]."

Eventually, the Bravo star had enough. "I just said, you know what, we're out of here."

The home sold in just 3 days, with escrow closing in a record 14 days.

"Looks like we're moving," Tamra wrote on Instagram on October 2. "I know what you're thinking 'already' We're very excited about our new house." 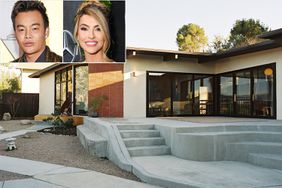