One passenger has died after a Southwest Airlines flight en route from LaGuardia Airport in New York to Dallas made an emergency landing in Philadelphia in a terrifying incident.

Southwest Airlines said in a statement on their Twitter page that they were “aware” of the incident on Flight #1380 and were in the process of evacuating the plane. The flight held 143 passengers and five crew members. On Tuesday, the deceased passenger was identified as Jennifer Riordan, a New Mexico bank executive and mother of two, according to the Associated Press.

“Safety is always our top priority at Southwest Airlines and we are working diligently to support to Customers and Crews at this time,” they said. “We will share updates to the flight as they are confirmed.”

Passenger Marty Martinez shared a Facebook live video showing him with an oxygen mask on captioned, “Something is wrong with our plane! It appears we are going down! Emergency landing!!”

Martinez spoke to CBS News shortly after the plane had landed in Philadelphia, where he explained something went wrong about 30 minutes into the trip.

“All of a sudden, we heard an explosion and I come to find out that the engine exploded on the left side of the plane,” he said. “That explosion caused one of the windows to explode in row 17 of the plane, which was just two aisles over from me.”

He added, “I thought I was cataloging the last moments of my existence. It was absolutely terrifying.”

Martinez shared photos on Facebook of the broken window.

“The plane felt like it was freefalling going down and we were probably going down for 10 or 15 minutes and of course, everyone is freaking out,” he recalled, saying even the flight attendants were visibly upset. “Everyone is crying. It was the scariest experience.”

Martinez said it wasn’t until they landed that a flight attendant said that an engine had blown out.

Todd Baur, the father of one passenger onboard, told NBC Philadelphia that a woman was nearly sucked out of the broken window.

She “was partially … was drawn out towards the out of the plane” and “was pulled back in by other passengers,” Baur said, adding that she was taken to a hospital.

Philadelphia Fire Department Commissioner Adam Thiel confirmed during a press conference that one passenger was transported to a local hospital in critical condition, but would not clarify if the patient was the woman who was reportedly partially sucked out of the window.

During a press conference Tuesday afternoon, National Transportation Safety Board chairman Robert Sumwalt confirmed one person had died as a result of the incident.”There was one fatality,” he said. He did not provide further details.

Thiel also noted that his emergency medical workers had examined 12 passengers and treated 7 for minor injuries on site. He also revealed that the fire department discovered a fuel leak and a small fire inside the damaged engine when they arrived on the scene, and sprayed the plane with a fire extinguishing foam.

Philadelphia Airport tweeted that passengers should expect delays, but that flights en route to Philadelphia are now being allowed to take off, and flights departing from the airport can safely do so. This follows a hold on all planes in and out of the airport issued by the Federal Aviation Administration earlier in the day. 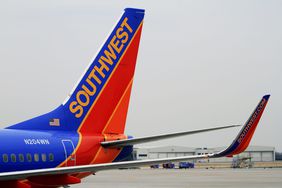 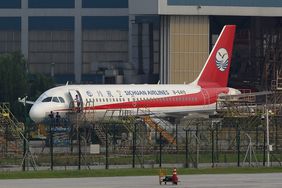 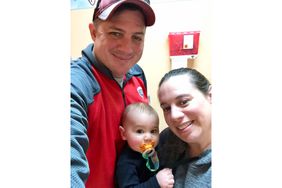 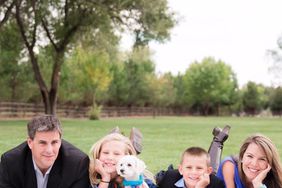 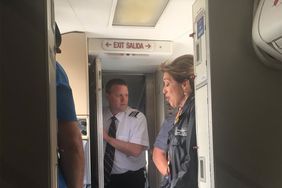 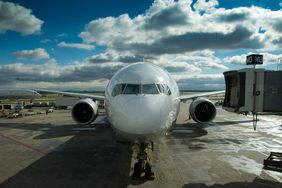 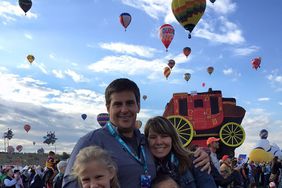