See Inside Rapper Big Sean's Clean and Cool Beverly Hills Estate - Which He Bought from Slash!

The Detroit 2 musician has a nightclub, bar and movie theater all within his walls

Big Sean always knew he wanted a career in music and a home that would inspire him to make it - and now he has both.

The "Deep Reverence" rapper, 33, who grew up in Detroit, purchased his 11,000-square-foot Beverly Hills mansion from Guns N' Roses guitarist Slash for $8.7 million four years ago, and recently opened it up to archdigest.com for a tour.

"The idea was to modernize the entire property, [and] to accentuate more of its natural beauty," Britney Wior, the creative director at JSN Studio, who handled the renovation of the three-story home, told the publication.

While Slash had decorated the home with dark, bold and edgy accents, Big Sean (whose real name is Sean Michael-Leonard Anderson) wanted the house to be more in line with his personal aesthetic: California cool, clean and classic.

Letting the outside in was very important for Big Sean when renovating the home, which he wanted to enable seamless indoor-outdoor living. The star spends plenty of time in his resort-style backyard, which features a limestone swimming pool, spa, fireplace and dining patio for outdoor entertaining.

The landscaping was also important. "I definitely like to wake up and smell the flowers," Big Sean said, pointing out a garden full of wild roses. Manicured hedges surround the entire backyard, which the rapper frequently uses as a space to meditate and reflect.

French Montana Selling Calabasas Home That Once Belonged to Selena Gomez for $5 Million - See Inside!

He did, however, keep a few favorite elements of Slash's home intact - including a nightclub, bar and movie theater.

One thing Slash didn't have, which was a necessity for the rapper, was a home recording studio. "My last few albums have been produced in-home," he said. The rapper's most recent album, Detroit 2, was released in 2020.

"To build the music studio, we basically had to build a room within a room," Wior said of the top-floor addition, noting that they did everything possible to ensure that the room was soundproof, including adding soundproof windows and fabric panels and lowering the pitched roof.

She also noted that Big Sean wanted the studio to be liveable, and a place people wanted to spend time in. "So we added windows to allow natural light inside the studio, as well as seating with an area big enough to allow others inside to collaborate," she said.

And while a good view is always important, especially in L.A., Big Sean's view is perhaps the most meaningful aspect of his home.

"When I look out to the left, I can see the building of my very first apartment from when I moved out of my mom's house in Detroit," the rapper said of the view from his recording studio - a daily reminder of how far he's come. 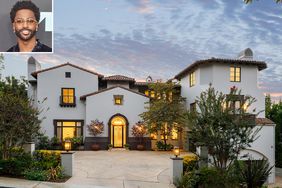 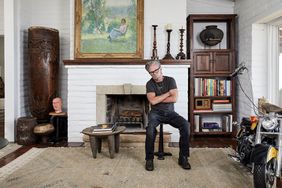