Richards and her real estate broker husband Mauricio Umansky moved into a new home in Encino, Calif. in 2017

PEOPLE can confirm that the Bel-Air property, from which they moved out 2017, has sold for$6.1 million, listed with Umansky's real estate brokerage, The Agency. The three listing agents on the property were Umansky, as well as Farrah Aldjufrie, Richards' daughter with ex-husband Guraish Aldjufrie, and Alexia Umansky, the oldest of the three daughters Richards shares with Mauricio.

After buying another estate in Encino in late 2017, the pair first put the property on the market for $6.995 million. When it didn't immediately sell, they decided to lease it — for $50,000 per month as a short-term summer rental and then for $25,000 per month as an annual rental, Variety reports.

In June 2020, they put it back on the market with a lower price tag, $5.95 million, before dropping to $5.695 million in October of the same year. Shortly after that, the couple began renting the home to Richards's RHOBH costar, Sutton Stracke, for $20,000 a month, while Stracke's new home was being renovated.

In August 2021, the property hit the market again for $6.75 million, before dropping in price several more times until the sale.

The 6,250-square-foot, seven-bedroom, eight-and-a-half-bathroom home is tucked away on a quiet, tree-lined cul-de-sac, according to the listing. Inside, an opulent foyer showcases the open staircase, 20-foot ceilings and Carrara marble-and-black granite tile floors.

The spacious chef's kitchen was a popular hangout for Richards, 53, on RHOBH when she was living in the home while filming. It features custom white cabinetry, marble countertops and a large island.

RELATED VIDEO: Alex Guarnaschelli Gives a Tour of Her Kitchen – And Shares Tips for Keeping Oil From Going Rancid!

Two en-suite bedrooms and private maids' quarters are located downstairs, while the upstairs has four additional sleeping spaces — including the master bedroom, which has its own fireplace. There's also an office and custom dressing room.

In the backyard, there's a putting green and a private tennis court is equipped with lights for night matches.

Richards, who has appeared on RHOBH since it premiered in 2010, hosted her famous white parties around the large swimming pool and spa, and on the dining and lounge terraces.

Richards and Mauricio will be celebrating their 26th wedding anniversary later this week. In addition to Aldjufrie, 33, and Alexia, 25, the pair share daughters Sophia, 22, and Portia, 14. 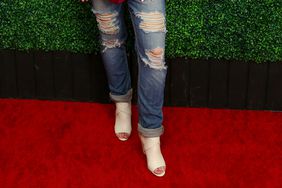 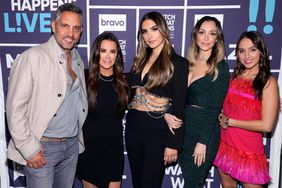 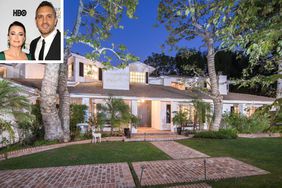