Nicole Curtis will star in a new spinoff of her hit series Rehab Addict on HGTV.

On Wednesday, the network announced the six-episode show, Rehab Addict Rescue, which is slated to premiere in early 2021.

The series will follow the former DIY Network star as she travels across the country to "mentor families who are overwhelmed by their own daunting historic home renovations."

"Each episode will spotlight Nicole and her team as they work alongside clients to overhaul spaces that don’t meet their modern-day needs—creating updated, functional dream homes that retain the properties’ history and charm," HGTV detailed in a press release.

The original Rehab Addict saw Curtis rebuilding neighborhoods in Detroit and Minneapolis on DIY Network and HGTV. It ran for eight seasons from 2010 through 2018.

"Nicole is a proven talent whose personal passion for older homes and renovation expertise have inspired millions of rehab enthusiasts who, like her, embrace the unique challenges and opportunities that come with renovating a classic, vintage home," Jane Latman, president of HGTV said. "If you’re in over your head on a home restoration project, it’s time for Rehab Addict Rescue."

Discovery Inc., the parent company of HGTV and DIY Network, announced in 2019 that DIY Network will shutter in 2020 to make way for Chip and Joanna Gaines‘s new Magnolia channel. (Magnolia's launch has since been pushed back from October due to the ongoing COVID-19 pandemic.)

Curtis confirmed to PEOPLE at the time that she had already parted ways with DIY Network. “We left before that decision was made (by choice) to take a much-needed break,” she said, adding that she was working on developing a new show for HGTV.

“I wish [Chip and Joanna] the best of luck,” Curtis added.

Nicole Curtis Shows Off Fit Physique in Swimsuit Selfie with Son: 'This Will Never Be Seen Again'

Curtis released an autobiography, Better Than New: Lessons I’ve Learned from Saving Old Homes (And How They Saved Me), in 2016 that detailed her rise to fame — from working as a Hooters waitress and a house cleaner to finding TV stardom.

"It wasn’t easy,” she told PEOPLE at the time. Bad boyfriends, tough financial times and sacrifices for her older son, Ethan, now in his twenties, forced Curtis to learn many lessons the hard way. “I’ve made stupid mistakes with my heart just like everyone else does,” Curtis said.

She's also addressed her very private second pregnancy with her son Harper, and her years-long "heart-wrenching" custody battle with his father, Shane Maguire.

In July of 2018, Maguire filed for sole custody of their child, alleging that Curtis was “not a fit” mother because, he said, she had intentionally inhibited his court-ordered time with their child.

That October, Curtis and Maguire reached a settlement that allowed them to maintain joint custody of Harper. Based on the terms of that agreement, neither parent is required to pay child support.

As part of their most recent deal, Curtis also agreed to create a trust for Harper that contains $250,000, which Maguire would be able to use to purchase a home within 25 miles of Curtis’ own, to help facilitate him spending time with his son.

With Harper, she also became an outspoken advocate for breastfeeding, explaining to PEOPLE in 2017 that she was practicing baby-led weaning with then 30-month-old Harper, which had also become a point of contention in her custody case.

“As much as I would say that it has really not been fun having everything drawn out in public, I think it’s also changed the course of my life,” Curtis said in July 2018. “Because God isn’t putting bad in your life without [a reason]. Sometimes, the storm is there to clear the path for the sunshine.”

Rehab Addict Rescue will premiere on HGTV in 2021. 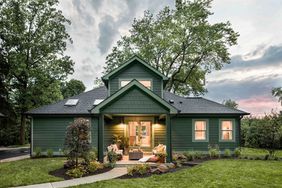