The Girls actress and creator purchased the historic property in 2015

If you're in the market for a charming home with a starry past, the property Lena Dunham just put up for sale might be for you.

The Girls creator and actress, 34, listed her three-bedroom, three-bathroom compound in Los Angeles's Spaulding Square neighborhood earlier this week, PEOPLE can confirm. She's asking $2,795,000 for the 2,457-square-foot home. The listing is held by Ali Jack, Boni Bryant and Joe Reichling of Compass.

Built in 1919, the property boasts Greek Revival-style details like a wide-columned porch and hipped roof. Over the years, it has been home to interior designer and antiques dealer to the stars, Brenda Antin - her pieces can be found in the homes of Kendall Jenner and Lea Michele - as well as Breakfast At Tiffany's star George Peppard.

Located in the middle of the city but tucked away among lush greenery, the main home features a spacious living room with an original fireplace, a formal dining room and cozy kitchen, a screened-in porch perfect for entertaining and a primary suite that leads out to the backyard porch and pool.

The home is painted in warm whites inside and out, and features modern and neutral details throughout.

A detached guest house with a loft, bathroom and kitchenette also comes with the house, providing a bright and airy space for visitors to stay over.

Dunham, who was raised in New York, also calls Manhattan home. In an essay penned for Domino magazine's Fall 2019 cover story, she recalled the challenges she had finding the right place to settle down after parting ways with her partner of almost six years, Bleachers singer Jack Antonoff, whom she split from in 2017. Dunham opened up about the "eccentric" second-floor Manhattan rental that she said finally makes her feel like she's home.

The Emmy-nominated actress explained that when their relationship ended, Antonoff was the one who stayed in the apartment they shared, while Dunham quickly purchased a new place of her own in Brooklyn - a decision she soon regretted.

"I made a massive real-estate mistake, the kind that nightmares are made of," she wrote. "I bought something in a state of panic, feeling like if I didn't put down roots soon I'd float away."

She never even ended up moving into the new place, selling it at a loss and bouncing around between friends' houses, hotel rooms and even her father's office.

She finally decided to search for a new place again after her dad called her a "grifter," which drove her to pick the West Village apartment from merely a thumbnail picture. "It was close enough to the art supply store, LifeThyme salad bar, and my therapist," she said of her decision to move into the rental.

At the time, she said she wasn't looking to move any time soon. "Across from me is a luxurious brownstone, but I'm not sure how it's decorated," she wrote. "I've stopped looking in other people's windows… I'm finally home."

Girls ended in 2017 after a six-season run. The show, also starring Jemima Kirke, Allison Williams and Zosia Mamet, won a Golden Globe in 2013.

In 2019, Dunham appeared in Quentin Tarantino's film Once Upon a Time in Hollywood alongside Leonardo DiCaprio and Brad Pitt. 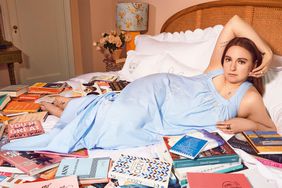