The home Kris Jenner was used for a stand-in on her hit E! reality series

The home that was used as a stand-in for Kris Jenner‘s house on early seasons of Keeping Up With the Kardashians has finally sold.

After 10 years on the market, the property, named the Iredell Estate and located at the Fryman Canyon Estates in Studio City, California, sold, PEOPLE can exclusively report. It was listed with Josh Altman, Matt Altman and Jacob Greene of Douglas Elliman.

According to Zillow’s property records, the home was first listed in 2007 for $12 million, and went through a series of price drops over the last decade. Previously, it was listed for $7.8 million with Brandon Assanti of Rodeo Realty Beverly Hills. The most recent listing price was $6.495 million.

While only the home’s facade was used on the show (similar to the famous Brady Bunch house) there is certainly a lot to see inside as well.

In March 2014, Kim Kardashian West explained that exteriors shots of different homes were used in KUTWK for “security purposes.”

“I would get people showing up at all hours ringing my gate and had to call the police on several occasions,” Kardashian said in response to a fan question on Mobio Insider. “People hoping [sic] the gate and scaring me. It was so unsafe. The Hollywood Star Tours would stop by too, bc they recognized my home from our show. After that we realized how unsafe it is to show the exterior of our homes. So now we use different homes for the outside for security purposes.”

The seven-bedroom, nine-bathroom house is situated on almost one-acre of land behind large gates.

The Mediterranean-inspired estate also has a gourmet chef’s kitchen with a breakfast room that features two chandeliers and three sinks.

A dining room, screening room, wine cellar and outdoor kitchen perfect for entertaining are among the luxury amenities.

A four-car garage and a fountain round out the property’s over-the-top features.

While the KarJenners never lived in the estate, it has been featured on other shows such as Chelsea Lately, True Blood and American Horror Story. 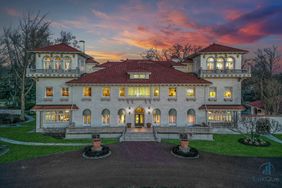