The star wants to add several structures including a "guardhouse" and "subterranean wellness center" to her Hidden Hills mansion, according to a complaint obtained by PEOPLE

Kim Kardashian is looking to build upon her Hidden Hills, California, home — much to the dismay of her neighbors.

According to legal documents obtained by PEOPLE, a neighbor of the 40-year-old Keeping Up With the Kardashians alum is asking a judge to stop the reality star from adding various features to her property.

The new additions that Kardashian is looking to build, according to the suit, include an "underground vault, subterranean parking, an attached subterranean 'wellness center' and a detached guardhouse."

The filing made by resident Sarah Key names the Hidden Hills Community Association, not Kardashian, as the respondent.

Key is asking the Association to end Kardashian's plan to "flatten two hills" and build upon "two high-pressure gas transmission lines," as she feels that the neighborhood should keep its "natural and rustic county setting" and building upon the gas lines will put "Hidden Hills community members at risk of catastrophic bodily injury and irreparable real personal property damage."

The filing also states that her plans "can and will cause irreparable harm at a minimum to the destruction of two hills of Hidden Hills" and "moving forward these two development projects may cause loss of a life."

Kardashian and estranged husband Kanye West purchased the house for a reported $20 million in 2014. The couple worked with Belgian architect Axel Vervoordt to create a unique all-white interior.

The former couple stayed with Kardashian's mom, Kris Jenner, during the renovation and finally moved into the home in December 2017.

Jenner tweeted in April 2018 that the house was now worth $60 million.

In a 2019 Vogue cover story, writer Jonathan Van Meter visited the estate and reported on some surprising details about the former couple's home.

"I had to pass through layers of Pentagon-level security and hesitated at their forbidding front door, which looks like it might be lowered over a moat, before deciding to walk around the side and enter through the garage like a normal person," Van Meter wrote of the entrance to their unique home.

RELATED VIDEO: Kim Kardashian West and Kanye West Flipped This Mansion and It's Stunning. Take a Look Inside

Inside the house, Kardashian has a "staff kitchen" and a "show kitchen," according to Van Meter. The staff kitchen, he said, is where she spent the most time with her husband and kids. The show kitchen is more for entertaining, as it boasts a massive center island and a breakfast nook that can seat twenty.

Van Meter described Kardashian's bedroom as "the size of an airplane hangar" while the en suite bathroom "offers a shower big enough for a basketball team." The streamlined space also includes a huge concrete soaking tub and an island with dual sinks. The glass walls are surrounded by dense vegetation for privacy.

According to Van Meter, she also has multiple rooms in her closet, including one for just handbags and shoes, as well as dressing rooms, which she often posts on Instagram when she shares her fittings.

In a "73 Questions" video interview with Vogue, Kardashian also gave a tour of the house and said that the vibe of the home was inspired by Vervoordt, and, of course, West, 44.

"I would say [it's] like a minimal monastery," Kardashian explained in the video, which shows off many of the mansion's massive, sparsely decorated rooms. 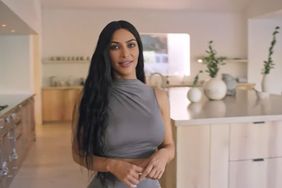