Kendall Jenner knows: the power of paint is real!

Recently, the 21-year-old model shared a photo of her faux-snow-covered Christmas tree in front of a pretty pink wall, and as it turns out, there was more to the color choice than Jenner simply being drawn to its feminine flair.

“While I was trying to figure out what I wanted to do with the room, I went to dinner with friends and they had just gone to the Human Condition exhibition at a former hospital in L.A.,” Jenner says in a new post on her app. “They were telling me there’s a pink room at the exhibit that had an explanation of the color choice: Baker-Miller Pink is the only color scientifically proven to calm you AND suppress your appetite. I was like, ‘I NEED this color in my house!’”

What her friends likely didn’t reveal is that the color, studied in the 1960s by scientist Alexander Schauss at the American Institute for Biosocial Research in Tacoma, Washington, is also known as “Drunk Tank Pink.” The alternative name, Baker-Miller, is a reference to the two correctional institute directors Schauss asked to use the color in confinement cells to test if it would calm prisoners.

WATCH THIS: John Krasinski and Emily Blunt’s Beverly Hills House Is Up for Sale!

Of course, it’s not necessarily a bad color. It’s been reported many times — in the New York Times and InStyle, for example — that changing out the clear or frosted light bulbs in your home for low-wattage pink ones creates the most flattering and romantic ambiance.

Jenner tracked down the rosy shade, and the rest is bright blush history.

The paint choice is far from the first design decision Jenner has made for her home, which she scooped up from Emily Blunt and John Krasinski. She’s expressed her loyalty to the Cloud Modular Sofa from Restoration Hardware which is, in her own words, “the most comfortable seating around.”

Jenner also sprung for 394 feet of stuffed velvet tubing, also known as the Boa sofa by the Campana brothers. “I realized I’d been really good and came in way under budget on my furniture allowance,” she says of the purchase. “I got super excited and bought another amazing couch.”

Looks like the super model’s living room is shaping up to be a super colorful affair. 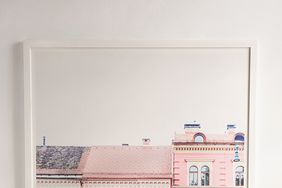 Pretty in (Millennial) Pink! 13 Home and Travel Accessories You Need to Embrace the Color of the Moment