Katy Perry and Orlando Bloom have found their new home.

The American Idol judge, 35, and the Carnival Row actor, 43, who welcomed daughter Daisy Dove in August, recently purchased a house in Montecito, California, for around $14 million, a real estate source tells PEOPLE.

A Bloom insider tells PEOPLE, "Katy grew up in Santa Barbara and always loved it there. Orlando has come to love it as well. He always enjoyed Malibu, but finds Montecito even better since it's much more private. "

"They agree that raising their little girl in Montecito will be amazing," the source adds. "They were looking for a house for a while before they put in an offer. They are very excited about their new house. It comes with a lot of history and a gorgeous ocean view."

Katy Perry Says Pregnancy with Orlando Bloom Was 'No Mistake': 'We Were Both Conscious About It'

Perry and Bloom got engaged in February 2019 after first being linked romantically back in January 2016.

On Aug. 26, the couple announced their daughter's arrival via UNICEF - the two are Goodwill Ambassadors for the charity - sharing a black and white image of their little one grasping her dad's finger while Perry held on to the newborn's wrist. "We are floating with love and wonder from the safe and healthy arrival of our daughter," the couple said.

Daisy is the first child for Perry and the second for Bloom, who shares 9½-year-old son Flynn with ex Miranda Kerr.

In a recent interview with Entertainment Tonight, Perry praised how her fiancé "has stepped in" since the singer returned to production on American Idol's fourth season. "It's hard a little bit these first couple of days away and not being able to be there," Perry said. "But Daddy's doing a great job. Daddy has stepped in. I've seen the [BABYBJÖRN] on him, I've seen him with the bottle, I've seen all the pictures. It's all good."

The "Smile" songstress told ET that coming back to work has been "amazing," saying she feels "so grateful for this opportunity and for this job, and to be able to continue to inspire other people to go after their dreams."

"I mean, my life just feels very full and whole," she added. 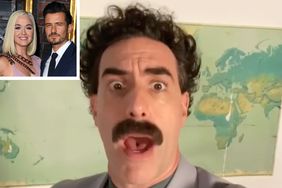 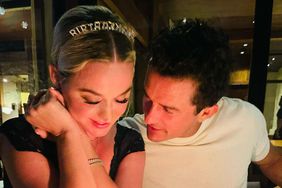