Karli Harvey gives PEOPLE an inside look at the blinged-out nursery for her baby boy, Benjamin II

Sometimes life throws you a curveball, as newlyweds Karli Harvey —yes, Steve Harvey’s daughter! — and Ben Raymond discovered when they learned they were expecting.

‘We were expecting to live the newlywed life of expensive dinners and travel,” Karli, 33, tells PEOPLE. Instead, the couple, who wed in September 2015, began planning for the arrival of their son, Benjamin II, who was born June 16, 2016. High on that to-do list: incorporating a nursery into their condo’s two-bedroom floor plan.

To help create a space that could do double-duty as the baby’s room and as a chic crash pad for guests, they enlisted the services the Steve Harvey Show décor guru, Mikel Welch.

Hollywood at Home: Peek Inside Five of Ellen DeGeneres’ Houses

His biggest challenge? Meeting the demands of the dynamic family.

“Everybody had an opinion on this one,” Welch said. “I had the opinion of Karli and Ben, which is obviously great, have because the room is for their child. However I also have their dad, my boss, Steve Harvey, who has a different level of expectation.”

The request list included modern elements for Karli, masculine touches for Raymond, and some sparkle for Harvey.

WATCH THIS: You Won’t Believe How Many Cigars Steve Harvey Has!

Welch found a way to deliver on all of their requests through small details, like the brass buttons on the Jonathan Adler sofa — “I got in a lot of trouble on that one because it was over my budget,” Welch said — custom drapes and bold green paint for a look that says “baby boy” without being basic blue.

The Kelly green shade was inspired by Tory Burch, one of Karli’s favorite designers, and also symbolizes one of Raymond’s favorite pastimes.

“It actually reminds me of the Green Bay Packers,” Raymond, 36, said. “I grew up being a Green bay Packers fan, so I think he did a fantastic job.”

RELATED: Khloé Kardashian’s Hyper-Organized Medicine Cabinet Will Blow Your Mind: ‘I Have a Little Aisle at CVS’

The room also prominently features a very special token repurposed from Karli and Ben’s wedding — a blessing tree with motivational notes from friends and family.

And, of course, the room wouldn’t be complete without a little touch of Steve Harvey. Welch designed a print on his computer that featured one of Harvey’s favorite quotes from Albert Einstein: “Imagination is the preview of life’s coming attractions.”

Karli adds, “And then he made sure that the baby has a copy of his book, Act Like a Success.” 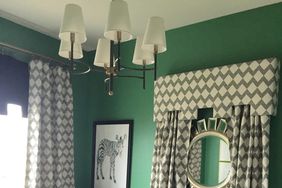 Design Rules: How to Get a Sweet 'and' Chic Nursery