Jonathan Scott Says He and Zooey Deschanel Will Go Caroling Together: 'She Is so into Christmas'

"We're good singers and whatnot, but she is a professional," Jonathan Scott tells PEOPLE of his family passing the caroling reins along to Zooey Deschanel

The Scott brothers will need to warm up their vocal chords along with their cocoa this holiday season — Zooey Deschanel is taking charge of Christmas caroling duties.

The New Girl actress, 39, who is also a Grammy-nominated singer, will join Property Brothers stars Drew and Jonathan and their family to take part in their holiday tradition.Her boyfriend Jonathan Scott says he’s passing along the reins to her when it comes to singing leading the group in serenading the neighbors.

“She is leading that mix,” Scott, 41, told PEOPLE at the Unwrap a Jaguar Dinner in Los Angeles on Monday. “She is so into Christmas.”

The twin HGTV stars will likely be joined by their parents, older brother, J.D., his new wife Annalee, and Drew’s wife, Linda Phan, Jonathan says. The group’s go-to carols? ‘”Joy to the World,” “We Wish You a Merry Christmas” and “Mele Kalikimaka.”

Scott says he and his parents typically also hand out cookies and hot chocolate along with their vocal stylings.

It’s a family tradition so time-honored that one year when they skipped caroling due to inclement weather, the neighbors took notice.

“The next day, we got people phoning and checking in to make sure that we were okay. They were worried because we had never missed it and they had missed us,” he says with a laugh.

Last year, the TV personality said his family’s caroling was met with an admittedly mixed reception in Los Angeles, where Drew and Linda recently moved.

“We went caroling, and the neighbors were aghast,” he recalls. “They were like, ‘What is happening? What is going on? Should we call the police? Who is it?’ And then they would see us and be like, ‘Oh, okay.'”

Now with his new girlfriend, Scott, who previously referred to himself as a “Christmas nerd,” says he wouldn’t dare stand in the way of Deschanel and her holiday cheer — she famously demonstrated her musical yuletide abilities in the 2003 film Elf and released a holiday album as one half of the musical duo She and Him— especially considering “she can actually sing.”

“We’re good singers and whatnot, but she is a professional,” he says. “[This year] it is going to be a full performance with separate acts.”

Give him and Drew a little credit, however. Aside from being expert home renovators, the siblings have also dabbled in a budding music career — and their twin status offers a unique advantage.

“The one thing that we do that benefits, as far us as being twins, is that [when] we go caroling … Drew and I have the ability to resonate off each other’s voices and harmonize,” he says.

PEOPLE first confirmed Scott and Deschanel were dating back in September, and their relationship is one with musical origins. The pair met on the series Carpool Karaoke, on which he and brother Drew sang one of their Christmas standards.

“We were singing from the moment that we first met,” he says. “The funny thing is I think that we caught her more off guard, because Drew and I sang ‘Joy to the World’ during Carpool Karaoke and she heard that and she was like, ‘What?’ She didn’t realize that we could harmonize.” 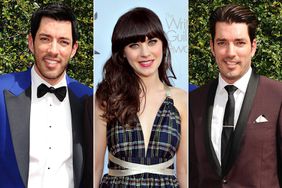