Jennifer Aniston is giving her fans another look inside her Bel Air estate.

While speaking to The New York Times recently about her return to television, the actress, 50, opened up the doors to the $21 million home she used to share with ex Justin Theroux.

In a series of behind-the-scenes images from the shoot, shared online by Aniston's stylists, sisters Nina and Clare Hallworth, the star stands outside her home, surrounded by lush green foliage.

Another sweet snapshot shows Aniston taking a break from the photoshoot and posing inside her home with her dog Clyde.

Jennifer Aniston Gives a Tour of Her $21 Million Dollar Home: 'There's Nowhere Else I Want to Be'

With a big smile on her face, the actress sits on a leather day bed, which stands atop a pristine white rug. The living room, which was designed by her longtime decorator Stephen Shadley, includes Midcentury furniture, fine art and a sophisticated black-and-white color scheme. The room also features a bar and a cozy lounge area.

"Bonny and Clyde," the stylists captioned the sunny snap on Instagram.

Aniston's beloved terrier also got a shout out in the Times story, with Aniston remarking, "I'm like a weird dog person, it turns out, like a dog lady."

Opening up about the design style of her home back in 2018, Aniston told Architectural Digest that "Sexy is important, but comfort is essential."

Aniston, who picked up the 1965 property in 2011 for $21 million, said the home was initially "the furthest thing from what I wanted" aesthetically.

Aniston and Theroux, who announced their split in February 2018, spent two years renovating the property decorating it together with help from Shadley. The collaboration was a struggle at first for Aniston, who had designed her previous home solo.

"Justin definitely wanted to be involved, so there was a bit of a learning curve for me on how to include another voice in the design process," she admitted. "For instance, I figured out that immediately saying 'No!' to any suggestion is not the most collaborative move."

The remodeling resulted in rooms thoughtfully layered with Abstract Expressionist paintings, hand-painted wallpaper, and silk rugs, while outside, the grounds were reimagined to include terraces, pocket gardens and a stunning pool surrounded by a teak deck.

"There was a time when I thought there was something romantic about picking up and trotting off somewhere different every three months. Now I'm becoming more particular about the projects I take," she said, adding that "there's nowhere else I want to be." 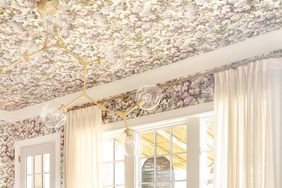 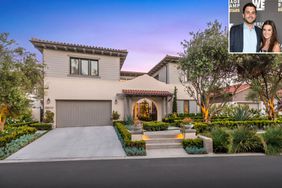