Jeff Lewis is saying goodbye to his modern compound in Sherman Oaks, California.

The four-bedroom, five-bathroom home was listed on October 28 for $4,995,000 with Million Dollar Listing Los Angeles' Josh and Matt Altman of Douglas Elliman. On Monday, the former Flipping Out star, 50, announced on a recent episode of his SiriusXM radio show, Jeff Lewis Live!, that the second family to come view the home put in an offer, and he accepted it.

"There are two weeks of contingencies, so they have 14 days to get out of the deal for whatever reason," he said in the episode, "but if it works I'm going to be moving out in 21 days, which is so insane."

According to property records, the Bravo star purchased the home in late 2015, then worked to completely redesign it for his growing family. He and his ex Gage Edward lived here when they welcomed daughter Monroe, now 4, via surrogate in October 2016. The pair split in February 2019 after 10 years together; Edward, 36, moved out, but Lewis continued to live in the home, and Monroe split time between her dads' houses.

Lewis has previously said that he designed the home, which has just over 4,000 square feet of living space on a .58 acre lot, with his daughter in mind.

Lewis shared on the new Jeff Lewis Live! episode that he and Monroe will be moving into one of his old homes, which he renovated on an episode of Flipping Out. He says that he lived in the home prior to remodeling it, and it has since been vacant.

"I'm a little fearful," he says of moving. "Just because, how's the new house going to work for Monroe? This has worked so well. And also how is she going to adjust, because this is the house she grew up in?"

That said, "I'm happy to start something new," he says.

He also joked that he warned the buyers that Machine Gun Kelly (née Richard Colson Baker) will be their new neighbor. Lewis and the rapper, who is currently dating Megan Fox, have famously feuded in the past after Lewis accused him of being too noisy and parking inappropriately.

"This wasn't my original plan," Lewis said of selling the family home on a previous episode of Jeff Lewis Live!, sharing that he was hoping to sell one of his flip homes in the Hollywood Hills instead. "But I'm open to all outcomes."

The backyard features plenty of green space, a dining area and outdoor kitchen, a fire feature and a gated pool and spa. Photos of the listing show a playground and a trampoline, as well. According to the listing, plans and permits are available for a guesthouse to be built on the property, should the new owner want to expand.

Inside, the chef's kitchen was custom built by Lewis and features a large, center island with plenty of seating, and all-new, stainless-steel appliances.

The main suite is one of the most luxurious areas of the home, boasting a private balcony, walk-in closet and fireplace. The ensuite bathroom has a steam shower fit for two and a free-standing bathtub.

Fans of Flipping Out will remember the home's guest room has been a site of conflict for Lewis and Edward in the past.

In June 2019, Lewis alleged that Edward locked himself in the guest room of the home during a disagreement that led to them both hiring lawyers in a custody battle over Monroe.

Lewis claimed on an episode of Jeff Lewis Live! that Edward had open access to the home, and he was able to see their daughter whenever he wanted.

"He was coming in the home once or twice a day," Lewis said at the time. "Until recently, when something happened last week where it made me very nervous and scared."

"We had a disagreement. It was over email," Lewis continued. "When I came in in the morning he had locked himself in my guest room and he said that he wasn't going to come out until I left. That made me feel very unsafe in my own home."

After the alleged incident, Lewis said he approached Edward and told him he shouldn't be coming to the house for visitation with Monroe anymore, but claimed he wasn't attempting to limit his access to their daughter.

"I will allow you complete access to Monroe, but I think you should just do visitation outside the house," the former Bravo star recalled saying to Edward.

Despite an attempt at mediation to find a permanent custody arrangement, the pair have still not reached an amicable agreement.

In March 2019, Lewis began dating boyfriend Scott Anderson, and the pair have been involved in an on-and-off relationship ever since. Last month, Lewis announced that they had split again, just a few months after he announced their previous parting in May. 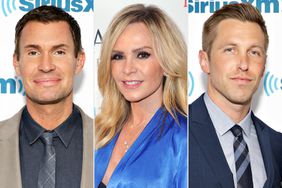