Jeff Lewis has hope that he and partner Gage Edward will come back together after their separation, but he’s not expecting it to happen right away.

On Friday’s episode of the 48-year-old house flipper’s SiriusXM radio show Jeff Lewis Live, Lewis opened up about the fact that Edward, 33, has moved out of the home they’ve shared with daughter Monroe, 2, and into a hotel.

“It was never going to be 3 days, it was going to be weeks, months,” Lewis said. “I don’t think anyone would be upset if we worked it out in a month or two or three or four or five.”

“I think that every single person that we know is hoping for a reconciliation,” he added.

His point came up as Lewis recalled seeing Edward again on Thursday night — one day after Edward had moved out, and hours after Lewis had announced that news to the world. According to Lewis, Edward had returned to help put their daughter to bed.

Edward did not respond to PEOPLE’s request for comment.

Jeff Lewis & Gage Edward’s Daughter, 2, Is ‘Totally Unaware of Any Tension’ Amid Separation

The pair will be continuing to co-parent Monroe in the wake of their parting, a source previously told PEOPLE.

“Monroe’s happiness is Jeff and Gage’s top priority. She’s their world,” a family source told PEOPLE of the couple, explaining that while Lewis and Edward have had a tough year in their relationship, they have worked to keep their tension from affecting Monroe.

“They’ve always kept any of the trouble that was going on between them away from her, making it a point not to argue in front of her or around her,” the source said. “She’s totally unaware of any tension. They’re great parents.”

When Lewis originally broke the news that Edward had moved out, he explained that the two had been staying in different rooms under the same roof for months, and their relationship had been reduced to “friends with benefits.”

“We were in separate rooms a significant portion of last year, so it was kind of like a roommate situation,” he detailed on Thursday’s show. “This has been a long time coming.”

On Friday’s episode, he dug into what he feels drove them apart. Lewis admitted he waited too long to “fight” and “work” on their relationship.

“I am a gay human yo-yo. And I am sick of being a yo-yo,” Lewis said. “I don’t want to be a yo-yo anymore. So that’s why I got off the Gage Edward rollercoaster.”

Still, Lewis said he remains optimistic about their future.

“I hope he gets the clarity and perspective he needs,” Lewis said on Thursday’s Jeff Lewis Live, of their temporary separation. “There’s so much anger that he has lost sight of the good things. Every time we have one of these discussions, it’s so overwhelmingly negative. I have a very different perspective. Last year was hell, but I remember nine pretty solid years. We had some fun. So I said to him [when he moved out], ‘I encourage you to work through that resentment and focus on the positive things because there could be more to come.’ “

“You go through the seven stages of grief,” he added on Friday. “Last night was pain, suffering, denial . . . The first thing you have to do is accept and admit.”

Lewis and Edward had a tumultuous year. Lewis’s grandmother passed away and Lewis and his friend of nearly 20 years and Flipping Out costar, Jenni Pulos, ended their personal and professional relationship. The latter, Lewis has suggested may lead to the end of their Bravo series after 11 seasons.

The couple’s relationship news also comes nearly 8 months after their surrogate, who carried their daughter, filed a lawsuit against them. Alexandra Trent is suing the couple as well as Bravo and the show’s production company, Authentic Entertainment, claiming that the show filmed her vagina without permission during her delivery and that Edward and Lewis made “disgusting” remarks about her.

She is seeking damages for unlawful recording, invasion of privacy and fraud. Lewis has strongly refuted these claims, but the legal action is ongoing and will likely go to trial. 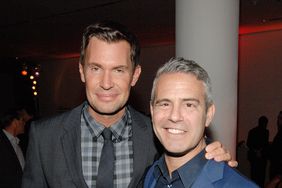 Jeff Lewis Vows to 'Never Use' Daughter Monroe, 2, 'as a Weapon' Amid Separation From Gage Edward