"I said very damaging things, and it is one of my biggest regrets," the former Flipping Out star shared

Jeff Lewis is seeing his split from Gage Edward in a different light, eight months after the partners of 10 years went their separate ways.

“I regret very much how I handled things with Gage the first two months of our breakup,” the former Flipping Out star, 49, said on Wednesday’s episode of his Sirius XM radio show Jeff Lewis Live. “I said very hurtful things, I said very damaging things, and it is one of my biggest regrets.”

“In some ways, I’m glad we co-parent because it’s forced us to rebuild our friendship,” Lewis added. “But the way I’ve worked with him, it is a big regret of mine.”

The couple separated in January, with Lewis announcing on his show that Edward had moved out of the home they shared with their two-year-old daughter Monroe. They had allegedly spent the better part of a year sleeping in separate rooms.

Since then, the exes’ relationship has been contentious to say the least.

The pair attempted to have a civil dinner (“not a date,” per Lewis) a week later, but the reality star ended up storming out in a rage. “My inner wounded child showed up at the restaurant and said, ‘F—k off, Gage’ And got up and walked into the lobby,” Lewis said of the incident on his radio show afterwards.

“That inner child made me a lot of money for a long time on reality TV, screaming and yelling,” he explained. “But that’s not what I want for the next chapter of my life. No one is going to be around me, including my child, if I don’t make these changes.”

At the end of Feburary, Lewis confirmed he and Edward had officially broken up. But the drama continued.

In March, he called out a man he says Edward began dating one week after their separation, labeling him a “home wrecker.” Edward allegedly responded by accusing Lewis of “harassment.”

Around the same time, Lewis claimed Edward threatened to hire a lawyer if Lewis continued down his “destructive path.” (Both men have since hired lawyers to negotiate custody of Monroe.)

On Wednesday’s show, Lewis spoke exclusively of the first two months of their break-up as the time he has regrets about, but there have been plenty of ups and downs since.

After the former Bravo star initially said he would not let his and Edward’s issues affect their daughter, the pair entered into what Lewis called an “ugly,” custody battle.

That same month, after an argument during which, he claims, Edward locked himself in the guest bedroom of Lewis’s house, he told listeners that he thought his ex was “unstable.”

Most recently, the expulsion of Monroe from an elite Montessori preschool after Jeff criticized it on the radio has caused a further rift between the two. Edward “lost his s–t,” Lewis claimed on Jeff Lewis Live on Tuesday.

“I had to explain it to him via text,” the Lewis said. “Gage was really, really upset and he did yell at me and he did say some things that he probably regrets now.”

Jeff Lewis Says New Boyfriend Is ‘Not Talking to Me’ After Fight: ‘He’s Retreated’

Lewis recounted their alleged exchange: “I said, ‘I think this is all for the best’ … and then he hung up on me.” He claims he then texted Edward to continue the conversation. “I wrote, ‘Gage this is happening for you, not to you’ and he wrote ‘F— off’ in caps,” Lewis continued. “I said, ‘I never liked that school anyway.’ He said, ‘You are so delusional. You are trying to justify your actions.’”

Lewis says he’s now looking at new schools for Monroe, who is currently staying home. He joked on Extra on Wednesday, that if the two-and-a-half year old didn’t return to school soon, she’d need to get a job. 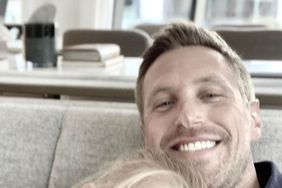