But the release of a newly restored version of one of her earlier films, the Academy Award-winning Howards End — based on the 1910 E. M. Forster novel — reminded us of all the reasons we love (and are definitely not terrified of) the eccentric actor, and all the ways we drooled over the movie’s titular ivy-covered English estate.

Architectural Digest recently talked to Bonham Carter about her London home, the movie props that she’s kept and her strange collection inspired by her Alice in Wonderland character, the Red Queen.

“It’s a very eccentric place,” Bonham Carter tells AD of her 1880 residence in North London. “It’s basically a group of artist studios. There are a lot of things that I’ve added on. Most people who come to the house think it’s basically a film set I’ve created.”

And it’s no wonder, when you find out how it’s decorated: “It’s a bit of Wonderland. I think one thing I’ve taken from acting is that if you have an environment that helps you, it can change your life. It can change your outlook; it can make you happy or make you fantasize,” says the actor, 50. “My house looks as if it should be in a book, frankly, or should be in a make-believe land.” Honestly, we would have been disappointed with anything less.

Asked if there are any favorite props she’s kept, Bonham Carter reveals, “There are millions. I have a lot of Alice in Wonderland stuff and Alice in Wonderland themes, playing on dimension. We have a few outside things, like the chair from [Tim Burton’s] Charlie and the Chocolate Factory, which was built for Deep Roy, the actor who played one of the Oompa Loompas.”

Another theme in her decor was an unintentional tribute to Alice.“I love tiny things, which, ironically, is something the Red Queen says,” Bonham Carter explains. But she actually started the collection before she landed the iconic role. “Years ago, before this house, probably when I was in my late 20s, I bought a pair or frog and dog candlesticks in Boston. They’re the same green that I’ve always loved—they are very Alice. So I’d sort of been living in Alice in Wonderland before I actually ended up having to act it. It was meant to be, I guess—down the rabbit hole!” 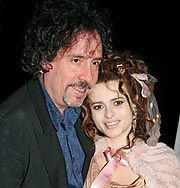 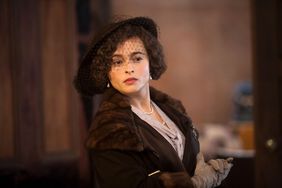