Gage Edward is looking to the future after a year filled with heartache.

The Flipping Out star celebrated his 35th birthday with an Instagram post that referenced his rocky 12 months, in which he split from his partner of ten year Jeff Lewis, and was named in a lawsuit brought by the surrogate who carried his and Lewis’s daughter.

“Self—that was quite a year,” he captioned a black-and-white photo of himself smiling in a tufted leather chair.

“Here’s to the highs and to the lows. We learned from it all. Our 35th year ahead is going to be a great one,” the business manager added.

Edward joined Instagram just last month, with his first photo featuring his 2½-year-old daughter Monroe Christine, whom he has been co-parenting with Lewis, 49, since their split five months ago.

The exes never officially tied the knot, but were together for 10 years and welcomed Monroe via surrogate in October 2016. They officially broke things off in February.

Edward moved out of the family home and into an apartment at that time, according to Lewis, who has also said on his SiriusXM radio show Jeff Lewis Live, that Edward has since started dating a man he met at the gym. Edward has not spoken publicly about his relationship status.

Earlier in May, Lewis announced on the show that his ex would be leaving his company, Jeff Lewis Design. Despite Edward moving out of their shared family home in January, he had continued in his role at the design firm, managing job sites.

Edward also faced legal troubles in the past year, when he and Lewis, as well Authentic Entertainment (the production company for Flipping Out) and Bravo, were all named in a lawsuit filed by Alexandra Trent, the surrogate who carried Monroe. Trent claimed that the show filmed her labor without permission and that Lewis and Edward made “disgusting” comments about her. She sought damages for unlawful recording, invasion of privacy and fraud.

However, the dispute was settled out of court in March, with Trent dropping all claims against them.

Despite the issues they’ve faced since their split, a source told PEOPLE, the fathers are dedicated to successfully coparenting. “Monroe’s happiness is Jeff and Gage’s top priority; She’s their world,” the insider said. “They’ve always kept any of the trouble that was going on between them away from her, making it a point not to argue in front of her or around her. She’s totally unaware of any tension. They’re great parents.”

Jeff Lewis Says He and Gage Edward Have Officially Broken Up: 'I Need to Move On' 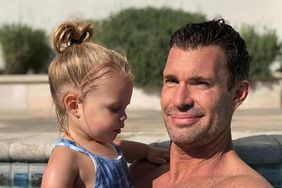