Everything in Will & Grace's Apartment That's Changed Since 2006

Grace's studio, Karen's bar cart and more changes to look for in the series' reboot

Will & Grace Are Moving Back In!

“This is, for the most part,” the original apartment,” McCormack, who plays Will, told TODAY. Though there are a few subtle differences that highlight how the characters have grown in the past 11 years.

“I do know that they were instructed to add pieces to reflect that Will has enjoyed success as a lawyer, and that he hired Grace to add some new flourishes to the apartment,” Messing (Grace) told Architectural Digest of the set decoration. An upgraded fireplace (with a familiar painting to the left) exemplify the shift.

The sitting area off the living room has a more grown-up vibe too, thanks to leather furniture and a moody color scheme. “[Will has] always had such urban, tailored, masculine, refined taste, so that was in the front of my mind,” says production designer Glenda Rovello. “How the show has evolved, and his apartment has evolved, and always showing that part of his character."

But it's the heart of the home that McCormack still thinks best suits his character. “This was always, and still is, my favorite place to be,” he says giving a tour of the kitchen. “I love being here.”

Grace’s studio underwent more major changes during the hiatus to showcase how she’s advanced her interior design career. "I think Grace, after going to design school, had a sure but steady trajectory in her career," Messing said.

One item did remain reminiscent of her past, though. "The drafting table is Grace's home base. It's the brain of the office,” Messing said. “It's where everything is explored and ultimately pulled together.”

“I would describe Grace as an interior designer as chic, functional, bold color, lots of texture, and extremely personalized,” says the actress. This plush seating area suggests all of the above.

Grace isn’t the only one who got a makeover. “I gave Karen a little Hans Wegner night table, as well as a little emergency martini setup,” says set decorator Peter Gurski. “Complete with a flash and a shaker and a little container of martini olives.” 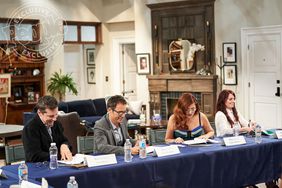 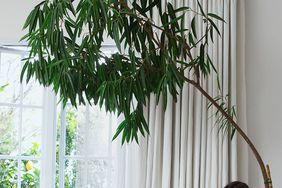 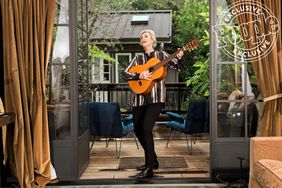 Inside Jane Lynch's Quirky L.A. Compound, Where the Glee Alum is a 'Lady of the Canyon' 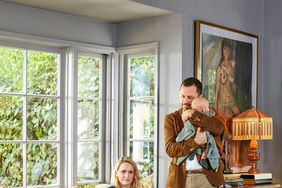 This 'Friends' Actor's L.A. Home Feels Like 'If Jane Austen Lived in Hollywood' — See Inside!