"We kept pressing through, even in those hard times," Joanna told the crowd of the INBOUND conference

Chip and Joanna Gaines may be Magnolia tycoons today, but it wasn’t that long ago that the Fixer Upper alums worried they could lose everything.

“The four or five years before we did the show, when the housing crisis hit, things were so hard for us,” said Joanna, who appeared Friday alongside her husband Chip at the closing session of INBOUND, the annual conference held by HubSpot in Boston. “For four or five years every Friday, we were saying, ‘Are we gonna make it?’”

“We kept pressing through, even in those hard times,” Joanna told the crowd. “The value of what we learned in that is something I’d never want to do again, but I’d never not want that. The hard is what makes us appreciate this.”

And while it may look perfect on screen these days, the duo says the reality of working with your significant other certainly isn’t for everyone.

“This is a very hard thing to do, to work together with someone you also have a relationship and a family with,” Chip told the audience.

“We definitely disagree. It’s not perfect. But for Jo and I, it really is a special bond we’re extremely proud of. We work really well together,” he continued.

“We’re this odd yin and yang, this whole opposites attract. It really was this powerful chemistry that happened early in our marriage. We enjoyed spending time together, taking on challenges together. I would argue that at the end of the day, we learned early that we’re a lot stronger and powerful when we’re pulling together, as opposites to pulling against each other. We’re a powerful force when we operate like that.”

Chip went on to reveal “our secret ingredient to our marriage and working relationship is a solid mutual respect.”

“We definitely disagree. It’s not perfect. A lot of hard work goes into this, but if you can get to a mutual place of respect, you can change the world.”

Chip Gaines on His Transition from Bachelor to Married Life with Joanna: ‘I Had to Make Changes’

There have been struggles they’ve faced individually, as well.

Joanna shared with the audience that for “many years,” she faced crippling insecurity about her own worth.

“I spent so many years just insecure, not believing I was good enough,” said Joanna. “I think of all the years I would sit there and not believe my value. I would go back and say, you’re not only good enough, you’re extraordinary, and the thing you have is a gift. And I’m the only one with that gift, period.”

“We all have a gift that we have to offer to the world. The sooner you know and believe it the better,” she added.

Despite feeling like “a lot of people are saying ‘Don’t go into cable TV,'” the couple revealed some details about their upcoming television network, which Joanna says will be “centered around lifestyle, home kitchen, business, everything. There’s this whole wellness thing.”

“That’s been the most fun part, finding these stories, either people we’ve known, we’ve met, we’re meeting via social media. What we are finding is amazing people who are great in those specific genres and highlighting their stories. There’s amazing stories that are waiting to be told, and that felt like the perfect for for Magnolia,” said Joanna.

But even with their own network, the couple says they remain “old school.”

“We still don’t have a TV,” Joanna said.

Before their appearance, the couple headed to Fenway Park on Thursday evening to catch the Boston Red Sox lose to the Minnesota Twins 2-1.

The duo watched the game from a box, and Joanna even got in on the local flavor. On her Instagram Stories, Joanna posted a video that shows “#busted” with her hands grabbing a few Munchkins from a box of ‘Dunkin’ Donuts.

Clearly, the couple were pleased with their time in Massachusetts. In a tweet after their segment onstage, Chip posed a photo with the caption, “If you’ve never been, put it on your bucket list. ‘Till next time Boston…” 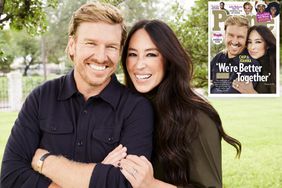 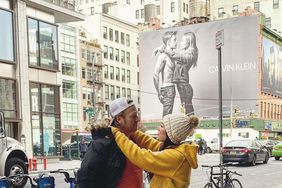