The bright lights and big city aren't for everyone: These stars relocated to live a quieter life in a rural setting

The actors, who wed in 2013, told PEOPLE they couldn't imagine a greater happily ever after than living in a cottage on 14 acres in New York's Castskill Mountains,

"This is what I've always wanted," Gilbert told PEOPLE of her quiet life with her husband.

The Little House on the Prairie alumna recently gave a glimpse into their home by poking fun at the unpredictable weather in the area on her Instagram page.

Sharing a video of snow falling outside and warm fire cackling in their cozy living room, Gilbert wrote, "How we do an early April Sunday morning here in the #Catskills."

The How I Met Your Mother actor told Jimmy Kimmel (his old neighbor!) that he realized he needed a change after the hit sitcom wrapped in 2014.

"I was like, 'Oh, I can do whatever I want now,' " the star said on Jimmy Kimmel Live ."I'm gonna go live in this town and I never left."

Without disclosing the name of the "little farm town" that he relocated to eight years ago, Segel said he's enjoyed becoming entrenched in the local community.

"I like being in a small town. Like, I go to the high school football games and stuff and eat a sandwich, which I didn't know if you could do without kids, but you can," he joked. "And I go to the Christmas play in town and I wait outside and ask little kids to sign my playbill. It's really fun. I love it."

Better yet, the actor added, he enjoys that the locals have "no idea" who he is.

In another sweet snippet, Segel said he also likes to wander through the 21 acres of orange groves on his property and now owns "a lot" of overalls.

The Dawson's Creek alumnus and and his wife Kimberly relocated their family from California to Texas in September 2020, and haven't look back.

"We wanted to get the kids out of Los Angeles. We wanted to give them space and we wanted them to live in nature," James said in a July 2021 interview for Austin Life magazine. "When we were flying here for our anniversary, I felt an energy to Austin … It was really cool to realize, 'Oh, I can go be there. We can drop in and bring our family to that.' "

Reflecting on the move in a recent Instagram post, the actor said he realized he hadn't miss L.A. when he and his family returned for a recent vacation there.

"It didn't feel like home anymore. Maybe it never was. Or maybe it was home for the time it needed to be," he wrote in part. "Or maybe… the key is to appreciate each place for what it is and drop any expectations it'll ever be something it's not."

In 2021, Chip and Jo expanded their farmhouse with an extensive addition that created an entirely new wing.

"We're adding on a little space because we've added an addition to the family," Chip explained in an episode of Fixer Upper: Welcome Home. "We used to have four kids. Now we've got a toddler on our hip."

The Entourage star opened up in the June issue of Austin Life Magazine about leaving behind his life in New York City and Los Angeles to live on a farm outside of Austin, Texas.

While he admits that his big-city life "was a f-- load of fun, and amazing while it lasted," he added, "I found myself in a stage of my life where I had to change."

"I bought a place in Austin five years ago, and a year ago I decided to move here permanently," he told the outlet. "I had friends here, I ran a business here, and liked the pace. Austin is cosmopolitan without being snooty; it's earthy. People are smart and successful but they don't flaunt it. There is nothing to prove, people accept you and it felt good right away."

"I have been doing environmental work for the last 20 years, I've started organizations and run non-profits, all designed to tell people to live more in line with nature - and yet, I wasn't living that way," he said. Now, he's developing his property, where he's "planted a fruit forest" and hopes to "create a wildlife sanctuary."

Despite being a Hollywood household name for over four decades, Selleck loves his low-key life on his 63-acre ranch with wife Jillie.

"I'm a fairly private person," the actor, who shot to fame with Magnum P.I. in the 1980s, told PEOPLE in April 2020. "And I've always treasured the balance between work and time with my family. It's always about them."

When Selleck is not shooting Blue Bloods, the police drama now in its tenth season, in N.Y.C., he's at home with his wife of 33 years on their 63-acre Ventura, California, ranch.

"My relationships and my ranch keep me sane," said Selleck, who is dad to Hannah, 31, and Kevin, 54, his son with first wife Jacqueline Ray.

The massive ranch was a working avocado farm until the plants were decimated by a drought, and is home to over 1,500 native trees. "I do grunt work and I make the rounds. I like watching things grow. It's a retreat."

The Real Housewives of Beverly Hills star revealed via Instagram that she and husband Aaron Phypers have plans to move part time to Montana.

"Soon we will be living here in Montana & Los Angeles.. best of both 🌎," Richards captioned her post, which features a photo of the couple smiling. "the first time I went to la when I was younger I felt like I was home, same feeling visiting Montana for the first time 7yrs ago. Such a sense of peace & simplicity."

The Ford v Ferrari actor moved his family to Indonesia, where they enrolled his son, Noah Rev, 7, in a special school where the mission it is to "create the next generation of environmental leaders," Lucas said on Jimmy Kimmel Live!

Lucas explained, "It's deeply in the jungle. It's like Swiss Family Robinson - they grow their own food, they make their own buildings out of bamboo."

His ex and mother to his son, Jessica Ciencin Henriquez, wrote on Instagram, "They say if heaven and hell had a baby, it would be Bali. I've never heard a more accurate sentence. One second I'm watching a picture perfect sunset, painted by the gods and the next I'm swatting away a dark cloud of mosquitoes and trying to keep frogs out of the house. One moment I'm madly in love with this nature soaked isolation and the next, I'm on sky scanner checking flights back to civilization."

When he isn't starring in Jurassic World or Guardians of the Galaxy, Pratt is raising sheep on a farm in Washington state. He even has prize-winning wool to back it up! He calls the ranch his "special slice of heaven."

After living in her Connecticut farmhouse for nearly a decade, the Bridget Jones's Diary actress put the historical home on the market in 2014.

The Bachelor in Paradise star currently lives out of his van. He told Entertainment Tonight of the decision, "I'm just, like, trying to travel the country and see what happens. I live in a van now. I'm planning on [traveling] all across the continental U.S. and then maybe up into Canada as well."

He added, "I've just always kind of had like a nomadic spirit in me, and I've always wanted to do it, and I was, like, no better time than now."

The singer sold his New York City and Los Angeles homes in 2012 and retreated to Montana, which he has called home since.

Ruffalo, his wife and three children live on a 50-acre plot of land in upstate New York, far from the hustle and bustle of Hollywood and Manhattan.

Ruffalo said of the real estate purchase, "The whole guiding idea for living upstate was to simplify. We asked ourselves, what do we need all this s--- for? What is it adding to our lives?"

Daniels moved to Michigan with his family 32 years ago "to create as much a sense of normalcy as possible." He said of the decision to relocate, "It was a very dramatic move in 1986 to move to Michigan, but that was to keep the family number one. And that worked."

The Mr. Robot actor bought a home in Coconut Grove, Florida, in 2013.

Holy Toledo, Batman! Keaton owns a ranch in southern Montana, where he has spent much of his time in the past 28 years. Keaton once said in an interview, "Once you see the west, there is no going back," and for him it may just be true.

The Lord of the Rings actor spends most of his time in Austin, Texas.

The comedian moved to Brevard, North Carolina, and started picking the banjo and writing bluegrass music. No, really. Martin lives in the small town, and frequently collaborates with the Steep Canyon Rangers. 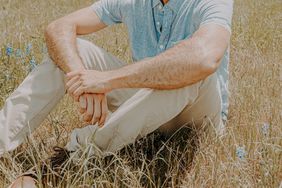