Brenda Antin, Renowned Interior Designer and Antiques Dealer to the Stars, Dies at 82

Brenda Antin died on March 4 of chronic obstructive pulmonary disease at her home in Los Angeles, a spokesperson for her family confirms to PEOPLE

Brenda Antin, an interior designer whose eponymous Los Angeles-based furniture store has helped decorate many celebrity homes, has died at the age of 82.

Antin died on March 4 of chronic obstructive pulmonary disease at her home in Los Angeles, a spokesperson for her family confirms to PEOPLE.

Prior to her career in interior design, Antin worked as a creative executive at Motown Productions, the television and film arm of Motown Records, in the '80s.

According to her obituary written by Antin's son Steven and provided to PEOPLE, Antin switched careers "after becoming disillusioned with the industry" and began following her passion for antiques and furniture design.

Antin opened her eponymous showroom with her husband, Michael Antin, in 1990.

Her talents and impeccable taste for design landed her an appearance on The Oprah Winfrey Show, during which she decorated an entire room in real time.

Antin's furniture often graced the pages of Architectural Digest, including the magazine's 2017 cover of Tom Brady and Gisele Bündchen's home.

"Brenda Antin's legacy of exemplary design, her unparalleled taste and beauty and her love of elegant living and the influence it had on so many will live evermore," Steven adds in Antin's obituary. "In a phrase... she was 'a force of nature.' "

In addition to husband Michael, with whom she had been with for 66 years, Antin is survived by her children: Steven, a writer and director; Robin, the creator of The Pussycat Dolls; Neil, an entrepreneur; and Jonathan, a celebrity hairstylist who's appeared on Bravo's Blow Out and Shear Genius.

"Together our family lived a typical Southern California lifestyle," Steven writes in her obituary. "Friends and family congregating at our house. Everyone was invited. And Brenda was always at the center of it all." 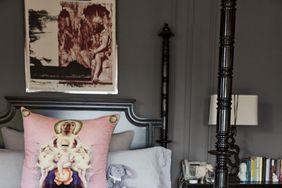