During a lengthy getaway to the Indonesian island, the couple enjoyed a day at the Bali Safari Park with their daughter Luna, 2, and son Miles, now 6 months. During their family vacation staying at the luxury Como Shambhala resort, they also lounged poolside, took cooking classes, and sampled the local cuisine.

The fashion designer and former soccer star met up with longtime family friend Elton John while cruising France's Côte d'Azur. The Beckhams and their four kids spent the summer globe trotting together, making stops in Bali and Croatia and Montenegro after shutting down rumors of a possible split.

The married couple celebrated the end of the European leg of Timberlake's Man of the Woods tour with a romantic getaway in Italy. Biel filmed Timberlake as he drove them through the scenic countryside of Tuscany in a red convertible.

"This was a trip I've been waiting my whole life to make," the comedian and talk show host wrote of her experience visiting endangered mountain gorillas in Rwanda. Her wife, Portia de Rossi, gifted Degeneres with a wildlife center and new conservation foundation in her name, for her 60th birthday in February.

Jenner joined her jet-setting daughter on her extended Italian vacation in July, just one day before Kourtney's daughter Penelope turned 6. To announce her mother's arrival in Portofino, the 39-year-old mom of three shared a series of photos of the pair lounging together — and sharing a laugh — on a yacht.

"Had some work to do so flew in the momager,” Kardashian captioned the images, in which the pair sat together in front of a laptop while Jenner, 62, enjoyed a glass of wine.

During a vacation to Montenegro, the media mogul opted for a shopping day, while her friend, Gayle King, chose a hike with some of their fellow travelers. While visiting the Balkan country, Winfrey also watched the sunrise and took a boat tour of the region.

While taking a breather from their On the Run II tour, the music moguls took a series of mini getaways around Europe, including the Amalfi Coast in Italy and the beaches of Nice, France between stops on their tour. They soaked up the sun on yachts and spent some much-needed family time with their six-year-old daughter, Blue Ivy.

The Queer Eye star brought his mom along on a Hawaii vacation with his new beau, Wilco Froneman, and a few friends. "Took my mom to Hawaii to meet the boy & some of my closest frands for some R & R REALNESS," he wrote,"and even though I swam face first into coral as soon as I arrived, it was the most gorg 5 days a boy could ask for."

The newlyweds jetted off to the Maldives after tying the knot on the Indonesian island of Sumba, for a luxe honeymoon in an overwater bungalow at Six Senses Laambu.

The Olympic swimmer ended a romantic night in front of the Eiffel Tower in Paris by sharing a smooch with his wife, Nicole.

A few months before Nick Jonas and Priyanka Chopra's dreamy wedding, Joe shared a photo of his brother and future sister-in-law cooling down in the Dallas heat. (Joe's fiancée Sophie Turner was absent from the family hang.) "Stay Cool Kids," he wrote, followed by a smiley-face emoji in a cowboy hat.

The Hamilton creator took his parents to Venice, to celebrate a big wedding anniversary. "Heluva Sunday, heluva 40th anniversary," he captioned a series of photos on Twitter. "40 years of PDA from my folks, bless ‘em," he wrote alongside a photo of his dad, Luis, and mom, Luz, sharing a smooch while on a gondola ride.

The Voice judge sported a patterned outfit and long braids while on vacation in Egypt. "#Vibes" she captioned the photo, followed by flower and sunshine emojis.

While island hopping in the Bahamas, the rapper snapped an underwater selfie while snorkeling around an old plane with a scandalous history. "As a Partner and a founder of the Medellín Drug Cartel with Pablo Escobar, Carlos Lehder had one of his drug running planes crash in four feet of water while attempting to land," he captioned the photo. "He used a remote island as a transshipment base for smuggling cocaine into the United States. And Damn right I scratched swimming in, over & around it off my Bucket List today."

Following a beautiful wedding ceremony in Nashville, the country stars jetted off to Bora Bora in French Polynesia for their honeymoon, where they swam with sharks and stayed in a romantic over-water bungalow. 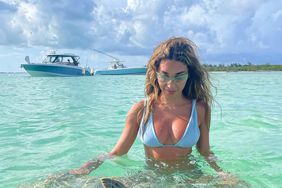 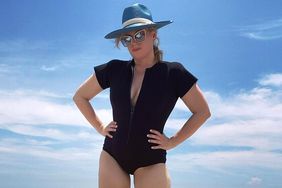