May the odds be ever in our demo day favor

Christina and Tarek El Moussa and HGTV’s slew of famous house flippers may soon have some new competition.

Former Bachelorette JoJo Fletcher, 27, and her fiancé, Jordan Rodgers, 29, have put their house flipping skills on display once before — and proven they have great taste in showing off their gorgeous Dallas home. Now, the two are revealing their latest project in a two-part video on Instagram.

“There is nothing more rewarding than getting to the end of a long, hard remodel,” Fletcher wrote alongside the clips, which capture the duo ripping up floorboards and chipping away tiles.

Although she mentions Rodgers “has a few scars from helping me on this one,” Fletcher doesn’t shy away from getting her hands dirty. She kicks through walls, spends time under the sink and wields a nail gun in a fashion that would make any HGTV-famous contractor proud.

Because Fletcher is just showing this side of herself to fans lately, some might think it’s a newly discovered hobby. But the two recent makeovers were far from her first rodeo in the remodeling world.

“In college, she developed and built some student houses,” Rodgers told PEOPLE in February. “And even before [The Bachelorette], she was starting to get into the flipping side of it because she’d been in the development side.”

He also complemented his bride-to-be’s natural knack for putting it all together. “She’s got such a good eye. I always felt like I did, and then she’ll say things and she’ll figure it out. ‘Let’s do this, let’s move this around, let’s put a bathroom here,’” he gushed. “She loves the design part of it. She’s so good at it.”

WATCH THIS: JoJo Fletcher On the Ups and Downs of Searching for True Love

Now the couple is mutually hooked, with Rodgers revealing his fiancée has her sights set on another property. “She’s getting some inspections done to make sure the numbers make sense, so when I go home we might have another house to do,” he said. “I love it, though. It’s so fun.”

Tarek El Moussa Buys New House ‘Within Hours’ of Seeing It for Kids, Taylor and Brayden

Fletcher clearly has a thing for the final reveal — in her video you can see the formerly outdated kitchen, bland bathrooms and cramped living spaces get a modern upgrade thanks to light-colored wood floors, white subway tile throughout and trendy finishes like a sliding barn door. But Rodgers’s favorite step in the process is more up Chip Gaines’ alley.

And as for whether or not they’d be open to a reno series of their own? “Absolutely,” he said. “I think we’d love to do that.” 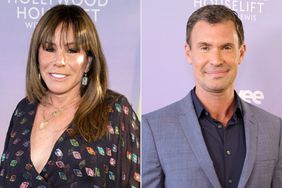