Ashley Tisdale is saying goodbye to her stylish former home after settling into a new place in the Hollywood Hills and welcoming her first child with her husband Christopher French.

The former Disney Channel star, 35, has unloaded her house in the Los Feliz neighborhood of Los Angeles for $5.78 million, PEOPLE can confirm. Listed with TJ Paradise of Sotheby's International Realty, the property went for a hair under the $5.795 million she asked when listing it in January, and still earned her a handsome return on the $4.1 million she paid in 2019.

Built in 1923, the 4,214-square-foot Mediterranean-style villa features gorgeous panoramic views of the city and boasts four bedrooms and two-and-a-half pristine bathrooms with a vintage flair.

Many of the structure's original details are intact, though the house has been upgraded with designer finishes throughout. European oak floors compliment lime wash walls, all soaked in abundant natural light. The backyard boasts a large deck and covered seating area, which overlooks the pool and the twinkling lights of L.A.

There's also a detached two-story guesthouse with one bedroom, one-and-a-half bathrooms, a spacious living room and an updated kitchen.

Tisdale previously dropped just under $5 million on another Mediterranean-style home in the Hollywood Hills in January. That purchase came just weeks before she and French, 39, welcomed their first child, a daughter named Jupiter Iris.

She gave birth to Jupiter last Tuesday, revealing the new addition the following day by sharing a photo of the new parents holding the infant's hand. "Jupiter Iris French arrived earthside 3.23.21," they wrote in the caption.

The couple announced their first pregnancy back in September, revealing the sex of their firstborn a month later.

"I was obviously excited because I definitely wanted a girl, for sure," she told PEOPLE in December. "But I am also someone who goes with the flow on a lot of stuff. I try to not have expectations in moments like that and just allow what is meant to be. I was very excited. I think my husband definitely was scared - he looked a little scared in the pictures!" 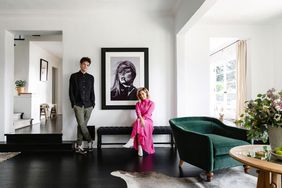 Ashley Tisdale Selling Furniture from Her Former Los Feliz Villa: Here's How to Shop the Pieces