Ant Anstead is dedicated to being the best modern parent he can be — and that's why he has such a good relationship with Tarek El Moussa and Heather Rae Young.

The Celebrity IOU: Joyride star, 42, who finalized his divorce from HGTV's Christina Haack in June after less than two years of marriage, has built a strong connection with El Moussa, who was married to Haack from 2009 to 2016 and shares two kids with her: daughter Taylor, 10, and son Brayden, 6.

Anstead coparented Taylor and Brayden while he was married to and lived with Haack (who shares join custody of her children with El Moussa), and he and Haack welcomed son Hudson, 2, in September 2019. (Anstead also has two older kids, daughter Amelie, 17, and son Archie, 15, with his ex-wife.) El Moussa's fiancée, Young, who stars on Netflix's Selling Sunset, has also been co-parenting Taylor and Brayden since she began dating El Moussa in 2019, and has even called herself their "bonus mom."

Despite no longer being with Haack, Anstead says he still considers El Moussa and Young like family, because of their connection through the kids.

"I think it's amazing how generations evolve to fit within the current times, and right now, we live in a time where blended families are common and ultimately you have to have relationships that are healthy with all this extended family. And by default, I've inherited an extended family [in Tarek and Heather]."

"To treat them in any other way would be dishonorable," he continues of their mutual respect and support. "I'm really proud of how we all kind of manage that modern blend."

In addition to celebrating each other's wins on social media (where El Moussa and Anstead frequently like and comment on each other's posts), El Moussa and Young also recently supported Anstead by attending the Radford Motors gala at the Lyon Air Museum in Santa Ana, Calif. in early August, as the British automobile brand — which Anstead helped revive — unveiled its new Lotus Type 62-2 coach-built sports car.

"I think it was really nice that they attended the event because ultimately that speaks volumes," Anstead said. (The black tie affair also happened to be his first public event with new love Renée Zellweger, whom he began dating in June after meeting on the set of Celebrity IOU: Joyride.)

Anstead and the Academy Award-winning actress, 52, have been very private about their relationship since it began, but have been spotted spending time together with Hudson, hanging out at Anstead's home in Laguna Beach, walking along the beach and attending open-air church services.

"They are getting pretty serious about each other," a source close to the couple told PEOPLE last month. "They're both busy with various projects and their careers, but they have a major attraction to each other."

Another source shared that Anstead's "focus is very much on his young son" amid his romance with Zellweger. 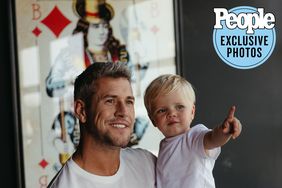