Vanessa Williams Shares Her Healthy Heart Advice: Have Courage, Get Screened and 'Be Persistent'

Vanessa Williams‘ grandmother died at 28 from heart disease, so the Ugly Betty actress and her daughter, Jillian Hervey, care deeply about heart health.

They’ve partnered with the WomenHeart organization and Burlington Stores to raise awareness and prevention for heart disease. “I’ve always been involved with heart awareness and heart disease because of my family history,” Williams told PEOPLE at the Burlingtonflagship store in New York City on Feb. 6.

“It’s about awareness and taking control of your health,” said Williams. “If there is an issue, don’t be afraid to have the courage to see what it is, get screened, go to the right people, and be persistent.”

The 54-year-old actress also announced that she will be releasing new music at the end of the year. But Williams isn’t the only talented singer in the family. Her daughter is in an Electro-Soul duo with Lucas Goodman called Lion Babe and has collaborated with Donald Glover on the song “Jump Hi.” Hervey, 28, also has new music coming out this year.

“We’re going to do a tour before Coachella that we haven’t announced yet, but it’s coming,” said the singer.

RELATED VIDEO: WATCH: Why Is Vanessa Williams Proud to Be Called a Diva?

Hervey makes her health a priority despite her busy schedule and said, “You’ll be in the studio sometimes for hours on end. Now I’ve brought in a yoga mat.”

The singer also likes trying vegan recipes and turmeric lattes with her friends. “Have fun when you want to have fun, and as long as you stay balanced I think you’re good.” 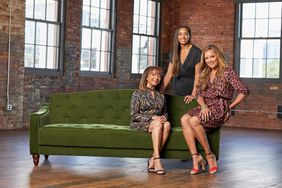