Twilight author Stephenie Meyer has a new movie – and an even more dramatic new look!

Wearing a floral dress, a black cardigan and bold red lipstick, Meyer, 39, showed off her dramatic weight loss at Tuesday’s Hollywood premiere of The Host, based on her 2008 science-fiction romance novel.

The movie – due to hit theaters March 29 – stars Saoirse Ronan as Melanie, one of the world’s last remaining free spirits. 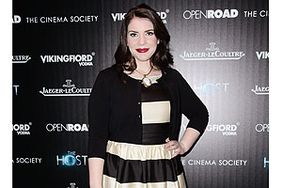 Stephenie Meyer Says She Lost Weight by Taking Up Running