Treatment for Depression May Have Saved LeAnn Rimes' Life: 'Best Gift I've Ever Given Myself'

The Grammy Award-winning singer may not have made it another year without treatment, she said at the Hope for Depression Research Foundation luncheon

Seeking treatment for anxiety and depression was the best gift LeAnn Rimes ever gave herself since it likely saved her life, she revealed Wednesday.

The Grammy Award-winning singer checked herself into treatment on Aug. 29, 2012, the day after she turned 30, she told the packed audience at the Hope for Depression Research Foundation’s 13th Annual Luncheon Seminar at The Plaza Hotel in Manhattan.

Breaking down in tears at the podium, she said, “Honestly, It was the best birthday gift I could have ever given myself because I don’t know if I would have made it to the next one.”

The 37-year-old singer, actress and author was honored with the Hope Award for Depression Advocacy for her courage in speaking publicly about the mental health issues she’s faced over the years.

During her emotional speech, Rimes talked about how she was “panicking” on the way to the treatment facility because she would be all alone for 28 days straight and left to face her thoughts, fears — and pain.

“Honestly until the day that I checked myself into that treatment center, I had never been alone,” she said.

After her loved ones said their goodbyes, “it was real,” she said. “It was the first time I couldn’t run anymore and I was running from a lot of trauma.”

She broke down again, pausing for a moment before regaining her composure.

“I know that so many people here understand that, so thank you for offering me the podium, because being able to share that is healing. It is freaking healing.”

Rimes checked into the facility about a year after her wedding to actor Eddie Cibrian in April 2011.

The couple wed two years after meeting on set of the made-for-TV movie “Northern Lights,” when they sparked a controversial, highly publicized affair.

Rimes separated from her husband at the time, former backup dancer Dean Sheremet, while Cibrian separated from his wife, Real Housewives of Beverly Hills alum Brandi Glanville, the mother of his two children, Mason and Jake, then 6 and 4.

Rimes was called a “homewrecker” and a “cheater” in the scandal that followed.

On Wednesday, she talked about the toll of the ordeal.

There was “a very public shaming around my relationship with my now-husband of nine years,” she said. “And all the running, and all of the hiding and all of the shame that lived inside was incredibly exhausting.”

“I wasn’t sleeping, though I couldn’t get out of bed, which made no sense to me. I was having debilitating panic attacks where I could not breathe and honestly, I think I’ve been holding my breath my entire life.”

Then came the help she so badly needed.

“I was so fortunate to have wonderful friends around me, and a wonderful husband, and a great support system … that sat me down and suggested that I get help.”

Hope for the Future

Her depression has lifted “for the most part,” though she admits she still “wrestles” daily with anxiety.

But, she added, “the conversation is changing around mental health, and I’m so happy that it is.”

Just the other day, she said, her 16-year-old stepson Mason “casually brought up at dinner that his school was passing out questionnaires to all the kids about their current mental states,” encouraging them to anonymously express their feelings and their desire for help if needed.

Brandi Glanville on Ending Her Feud with LeAnn Rimes: ‘If You Can’t Beat Them, Join Them’

“He then proceeded to tell us that he is a very optimistic young man, which is lovely to hear, but I just found it so fascinating and liberating that this young man was sitting in front of me, just so easily and casually bringing up mental health at dinner with his family.”

She is “excited” that young people are talking about mental health more openly.

“I hope it is not only our youth but the whole world,” she said. “The most important words we may ever speak is, ‘I need help.'”

She ended her powerful speech by saying, “I’ve accepted many awards in my life, but I never thought I’d be accepting one for this. And honestly, this is one that I will be most proud to put up on my mantle. So, thank you.” The crowd gave her a standing ovation.

Audrey Gruss, who founded the HDRF in 2006 in honor of her late mother, Hope, who struggled with clinical depression, said, “LeAnn touched all our hearts. Depression is so prevalent all over the world and it’s so important to do something about it so I am so proud of what we accomplished today.”

The Hope for Depression Research Foundation’s goal is to fund the most advanced depression research to find new treatments and new ways to prevent depression, bipolar disorder, postpartum depression, post-traumatic stress syndrome, anxiety disorder, and suicide, according to its website. 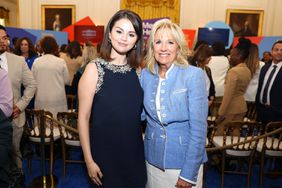 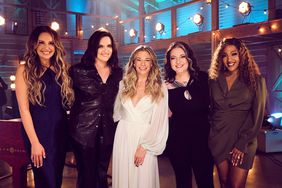