Teresa Palmer Reveals She Suffered from Orthorexia, an Obsession with Healthy Eating

"It was exhausting, utterly exhausting, to log every calorie and to just be so overly conscious of the food I was putting into my body," the Australian actress said on a recent podcast

Teresa Palmer is opening up about her previous disordered relationship with food — and how motherhood "liberated" her.

The Australian actress, 34, revealed on the Mamamia Me Before You podcast this week that she has suffered from the eating disorder orthorexia, which according to the National Eating Disorder Association is "an obsession with proper or ‘healthful’ eating."

Symptoms of orthorexia, which is not formally recognized as an eating disorder, include compulsively checking ingredients lists, cutting out entire food groups and spending hours each day thinking about food one might be served, among others.

Palmer, who welcomed daughter Poet Lake last year, shared on the podcast that from 2009 to 2012, she "was in a very unhealthy relationship with food."

"So I had orthorexia," Palmer shared, saying that looking back on that time period has given her the distance to diagnose herself with the disorder. "Not many people have heard of it, but it is an eating disorder," she added of the condition.

"I was incredibly clean with my eating, so I didn't have anorexia or bulimia, but I had something different, which is when you become so obsessed with the amount of calories you're putting into your body, everything had to be of the highest quality. I wouldn't eat anything stripped of its nutritional value."

The Hacksaw Ridge star said "it was exhausting, utterly exhausting, to log every calorie and to just be so overly conscious of the food I was putting into my body."

Palmer explained that her disorder began after an agent told her in 2008 she needed to work out more after paparazzi photos of the actress in a bikini circulated.

"She said, 'Do you know what? You should start working out, because that's a part of your job. You need to make sure that you look really good.' And I was like, 'Oh, I thought I did look good,' " Palmer recalled.

"The scary thing is that I've always been such a small person," she said. "I look back on the photos that she's talking about and I was just so little still. Yes, I wasn't perfectly sculpted, but that really set off this huge whirlwind of unhealthy obsession surrounding food."

The Warm Bodies star said that having children "healed" her relationship with food.

Baby Girl on the Way for Teresa Palmer

"My body just blossomed and I had this big belly and I could feel life within me, and it was just incredible seeing what my body could do," she said of pregnancy. "I was getting stretch marks on my boobs and cellulite all over my bum and the backs of my thighs."

"I was finally liberated from these judgements that I had surrounding my body, which I realized had existed since I was ... a teenager," she said. "Since being a mum, I've embraced it all. The lumps and the bumps and the stretch marks... it's a map of my journey of bringing my babies into the world." 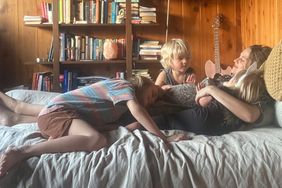