"I'm trying to figure out how to accept who I am now," says Shannen Doherty

Following a painful and terrifying battle with breast cancer, Shannen Doherty is now in remission. But the actress, who currently stars on BH90210, the buzzy reboot of Beverly Hills, 90210, says her recovery is a daily process.

“I don’t think you’re ever on the other side [of cancer],” Doherty, 47, tells PEOPLE. “I don’t think about the fact that I’m in remission. I look at it like I’m lucky to be alive every minute, every second of the day.”

Diagnosed with breast cancer in March 2015, Doherty initially underwent hormone therapy before ultimately undergoing a mastectomy, followed by brutal back-to-back rounds of chemo and radiation. In 2018, she underwent reconstruction with an innovative surgery called DIEP flap, in which the breast is rebuilt using the patient’s own tissue.

From Diagnosis to Reconstruction Surgery, Shannen Doherty’s Cancer Battle — In Her Own Words

“I really took good care of myself, and I came out of it in as good of condition I think somebody [in my situation] could be in,” says Doherty. “But the funny thing with cancer is that once you’re no longer on chemo or radiation, people think you’re fine, that you bounce back. But what they don’t realize is that your body has been through something so incredibly difficult that your body never fully bounces back.”

Long days filming on the set of BH90210 “has taken a toll,” Doherty admits. “I’m exhausted. And I’m really terrible with self-care. When I‘m at work, I have a tunnel vision mentality.”

Watch the full episode of People Features: Shannen Doherty streaming now on PeopleTV.com, or download the PeopleTV app on your favorite device.

For more from Shannen Doherty, pick up this week’s issue of PEOPLE, on newsstands Friday.

Still, the star says she’s trying to come to terms with how her body has changed.

“I’m trying to figure out how to accept who I am now,” says Doherty. “I’m never going to be the size I used to be. Some of my meds that I’m on keep zapping the collagen out of me, so I’m never going to have a wrinkle-free face. I’m critical of myself. But there are some things you can’t fight.”

Ultimately, “I’m trying to be kinder to myself,” says Doherty. “And I try to live each day as an amazing, precious gift that I’ve been given.”

Shannen Doherty Is 'Done' with Hollywood's Botox Obsession: 'I Love That I've Lived' 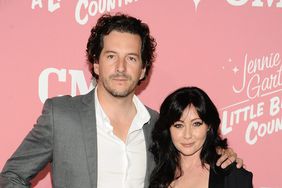