Mom Breastfeeds Her Newborn Son After Cancer and a Mastectomy: 'It's an Amazing Feeling'

After enduring stage 3 breast cancer and a mastectomy, Bo Smith says breastfeeding her newborn son feels like a miracle.

The new mom, 32, doubted if she would ever have the baby she always dreamed of when she was diagnosed with inflammatory breast cancer, a rare and highly aggressive form of the disease.

Smith was diagnosed in February 2015, a few months after discovering a lump in her left breast. While it was worrisome, she thought that, at 29 years old and with no family history of breast cancer, it was just a cyst.

“Then I start getting very sick after I ate, and I was very tired, and the lump went from very tiny to extremely large, and took over about half my breast,” Smith, from Sugarland, Texas, tells PEOPLE. “That’s when I was like, no, there’s something else going on here.”

After an ultrasound and biopsy, doctors told Smith that she had stage 3 invasive ductal carcinoma. But when she went to MD Anderson Cancer Center in Houston for treatment, she learned that it was actually inflammatory breast cancer, a much rarer form. Her cancer also was not hormone-driven, which is unusual — and made her treatment tougher.

“There was nothing that the doctors could target, so they just said, basically, we’re going to put you on a trial, and see if these drugs work, and basically just cross your fingers,” she says. “I think I was just so numb at that point that I couldn’t even cry. I felt like there was nothing else to do except to try and fight it.”

Smith’s cancer was so aggressive that she was growing a new tumor almost daily, so doctors immediately started her on the first of 16 rounds of chemotherapy, and six different drug treatments. After that, she underwent a mastectomy to remove her left breast — but decided to keep the right one.

“I had a horrible fear of it coming into my right breast, but at the same time I wanted to keep my breasts, because if there was a chance that I could have children in the future, I wanted to be able to breastfeed them,” she says. “Knowing that breast cancer was already taking that one breast from me, I just felt like it would be unfair for me to let it take that other breast too.”

RELATED VIDEO: 24-Year-Old Gets Preventive Double Mastectomy: ‘I Was Scared That I Was Making the Wrong Decision

Smith was also reassured by her doctors that it was extremely unlikely that the cancer in her left breast would spread into the right side. “They said it would be a whole other kind of cancer if that happened.”

After her mastectomy, Smith did 44 rounds of radiation — twice a day, from Monday through Friday — and thankfully had she had no active cancer cells by the end of chemotherapy. In February 2016, one year after starting treatment, she learned she was in remission.

Smith’s dream was to become a mom, but she had to wait another two years before she could try and get pregnant — and even then, it was unlikely that it could happen. With her aggressive cancer, she wasn’t able to do an egg retrieval before she started chemotherapy. Doctors also attempted to protect her ovaries from the chemo, but they were unsuccessful. They believed her best chance of getting pregnant was IVF.

But once doctors told Smith she could try to get pregnant, she wasn’t ready for more injections.

“I felt like my body had already been through so much in the past two years that I wanted to give it a break and try to conceive naturally for a year,” she says.

And amazingly, it worked. With the help of an oral medication to encourage pregnancy, Smith was pregnant within two months.

“It was shocking,” she says. “I was shaking a lot that day! When I was diagnosed I thought that was it, and I would never be a mom. I never even pictured myself being here in three years.”

Smith and her fiancé James welcomed their son — also named James — on Aug. 18, and she treasures the time they spend breastfeeding.

“To be able to breastfeed him, I know that I made the right decision to keep that breast,” she says. “Now I breastfeed him every day, multiple times a day, and every time he latches on I feel amazed that this is actually happening. That I have a son, that he’s mine, that I made him and he’s breastfeeding.”

Smith shared a photo from one of their times nursing together and posted it on Facebook, where it now has over 16,000 likes and 5,400 shares.

“I did not even expect that picture to go viral,” she says. “That was just one of those raw moments that I thought would be good to share with people and show that there was still hope.

“I thought that if it would get to just a few people who needed help, that’s all I wanted,” she adds. “I never expected it to get as big as it did. It blew up!” 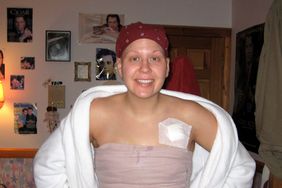