Mayim Bialik Is Recovering from Anorexia: 'I'm Trying to Release the Pressure of Caring'

Mayim Bialik is working towards recovery from anorexia and disordered eating, she shared for the first time this week.

The Big Bang Theory alum, 45, opened up about her battle with eating disorders in the latest episode of her new podcast, Mayim Bialik's Breakdown, Yahoo! News reported. Speaking with author and activist Glennon Doyle, Bialik told her: "I happen to be a compulsive overeater, and I'm an anorexic and I'm a restricter and I've never said that."

"I eat too much when no one's looking," she said, and later added, "I'm eating so I don't have to feel anything."

Bialik told Doyle that she is often asked about her body in her career, and was once told she was "brave" for acting in a movie when she was 30 lbs. above her usual weight.

"This is the first time I've ever talked about it, because people are like, 'Well, why are you so overweight?' Well, because I'm a compulsive overeater in addition to being an anorexic and restricter," she said, with a laugh.

Mayim Bialik Doesn't Want to Show Off Her Body 'Imperfections': 'I Don't Feel Empowered by That'

The actress and mom of two said that she is working on letting go of the pressure from the entertainment industry to lose weight.

"I'm trying to release the pressure of being 15 pounds lighter, which is what I, quote, 'should be' by Hollywood standards," Bialik said. "I'm trying to release the pressure of caring that I'm wearing the clothes that make me look like those other women, even though I'm not those other women. Those are, like, my short-term 2021 goals. Like, when can I wear all black and not have a stylist be like, 'We need you in more color.' It's like, how about if I wear black because I feel the best and I like it, and they make a lot of cool clothes in the color black?"

Bialik said that having Doyle, who has been open about her own past struggles with bulimia and food issues, on the show compelled her to share her own experience for the first time.

"I only feel inspired because of her, to do that," Bialik told her boyfriend and podcast co-host, Jonathan Cohen, when introducing the interview at the beginning of the podcast. "I've known about my problems for years, and I've been in recovery, as it were, for two years."

Bialik has long been open about her mental health struggles, and added during the interview that she's been in therapy since age 17 because "the kind of help that I needed, you need it forever, I promise." In 2018, she opened up about her history of depression and said that therapy and medication have made a significant difference in her mental health.

"I wish I could have told my younger self that something will work," Bialik said in a video for Mental Health Awareness Month. "It's just going to take sometimes more research, sometimes more referrals, and really figuring things out like your life depends on it. Because for me, it did." 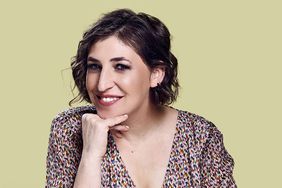