"I deserve the spotlight. I deserve the attention. I'm talented, I'm young, I'm hot. You know? And I've worked hard. ... I had to blaze a trail. There was no Lizzo before Lizzo."

"I'm so much more than [brave]. Because I actually present that, I have a whole career. It's not a trend."

"We eventually get used to everything ... So people just gon' have to get used to my ass."

"I'm all about body positivity and self-love because I believe that we can save the world if we first save ourselves."

- at a show at the Red Room in Sydney, Australia

"I made a decision to be myself because I knew I had no choice. Sometimes the label 'unapologetic' bothers me because it can be loaded, because it means we have to apologize for something in the first place. I'm not ignorant to the fact that we had to have a demeanor of lowering ourselves culturally just to exist. But I'm trying to shake up the narrative about how we're supposed to act."

"I have nothing to hide. There's no shame anymore. I just post myself. It's like, you take me as I am. You don't have to love me."

"I don't think that loving yourself is a choice. I think that it's a decision that has to be made for survival; it was in my case. Loving myself was the result of answering two things: Do you want to live? 'Cause this is who you're gonna be for the rest of your life. Or are you gonna just have a life of emptiness, self-hatred and self-loathing? And I chose to live, so I had to accept myself."

"Who I am, and the essence of me, and the things that I choose to do as a grown-ass woman, can inspire you to do the same. They don't have to be like me - you need to be like you, and never ever let somebody stop you or shame you from being yourself. This is who I've always been - now everyone's looking at it, and your criticism can just remain your criticism."

"You know how long it took me to fall in love with this body? My butt was my least favorite thing about myself. And I learned to love it. And now it's the thing everybody can't stop talking about ... Be you. Do you. Don't let anybody steal your joy."

- on CBS This Morning

"I didn't have enough women to look up to and they weren't given enough space in the industry to carve out a lane for big girls that are brown and black and want to sing and dance without getting shit talked and body shamed. I'm out here and I set my mind to it. I want to be a sex symbol and music goddess and I'm out here trying to make that happen for myself. I'm here for the fantasy but I want to be a part of that fantasy. I'm just as fine as those girls." 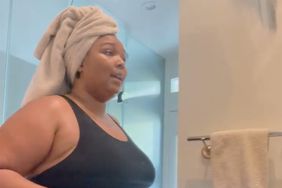 Lizzo Praises Her Belly as She Gets Candid About Body Image Struggles: 'I Used to Want to Cut My Stomach Off'