The star said when she was first diagnosed, she thought the doctors "must have made a mistake"

Julie Walters is opening up about the moment she received the unsettling news that she was diagnosed with bowel cancer.

The 69-year-old actress shared her story with BBC’s Victoria Derbyshire — in an interview which aired Thursday — explaining that while she’s currently in the clear, her brush with the disease has given her a new perspective on life and her career.

Walters revealed to the outlet that she was diagnosed with stage 3 bowel cancer 18 months ago, after doctors found an abnormality in her intestine following a CT scan. At the time she was filming the upcoming film, The Secret Garden, from which she later had to be cut from several scenes.

“I was still thinking, ‘That’s ridiculous, he must have made a mistake’. I couldn’t believe it,” the Mamma Mia actress said of hearing the diagnosis.

Her doctors, however, told Walters, “We can fix this,” keeping her hopes high.

Walters recalled having to share the news with her husband, Grant Roffey, which she said was a moment she’ll “never forget.”

“Tears came into his eyes,” she added.

According to the American Cancer Society, bowel cancer, which is also known as colorectal cancer, is the third most common cancer among men and women in the U.S., with an estimated 104,610 new cases of the disease projected for 2020.

The actress underwent surgery where she had nearly a foot of her colon removed and revealed she later went through chemotherapy.

Now, Walters said she is doing “really well,” sharing that she “just had a scan and I know that [I’m] clear.”

Her diagnosis “completely changed” her thoughts on acting, she told BBC, adding that it was a “huge relief” to take a break from the “merry-go-round” of working all the time.

“I was due to do two big series… and there were two films. And I just didn’t have to do any of it. And that was wonderful,” Walters admitted.

The star asserted that she isn’t cutting out acting completely, however, she added, “I certainly don’t think I can go back to [working] six days a week, five in the morning till seven o’clock at night.” 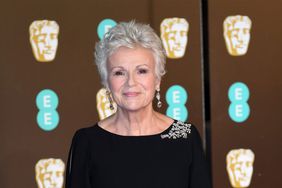 Julie Walters Reveals She Kept Her Cancer Battle Secret from Daughter: I Didn't Want Her 'Worrying'