Joy Behar gave an update on Whoopi Goldberg‘s health during Wednesday’s episode of The View: Her co-host has pneumonia.

“She’s not feeling well,” Behar, 76, said during the broadcast. “She’s actually recovering from pneumonia. I saw her last night and she’s very funny still, and we had big laughs. She’s getting there, she’s on the mend.”

Behar also debunked the rumor that Goldberg was away prepping to host Sunday’s Oscars. Goldberg has hosted the award show four times, and some fans thought she had secretly accepted the honor again this year.

“There are all these conspiracy theories on the Internet that she’s not really sick and she’s secretly preparing to host the Oscars,” Behar stated. “She’s not even well enough to host this show right now, let alone the Oscars.”

The View co-host Meghan McCain joined in on the discussion, adding that the rumor was started by one Twitter user in particular.

“This conspiracy started because @Peterknegt started the conspiracy and said, ‘never started a conspiracy theory before, but turns out being stoned while watching The View is productive,’ ” McCain said on the show.

Goldberg has now been away from the talk show for two weeks, which airs on ABC, the same network that broadcasts the Academy Awards. 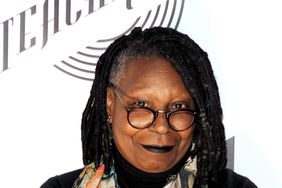 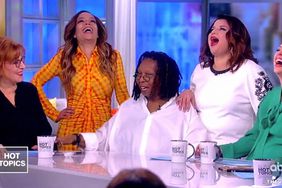